Forward Ashley Nadesan notched goal number four for the season at the Stadium of Light on Tuesday night but he insisted afterwards that it was the team’s needs, and not his own scoring tally, which always comes first. 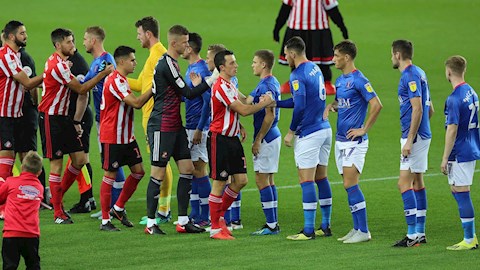 “It was good to score, that’s what I’m on the pitch for, but I’d have preferred it if the result was better,” he said. “Everything I do is for the team, because we all want to be pushing for at least the play-offs, so it’s all about getting points as far as I’m concerned.

“We’ve always said that Sunderland was going to be the toughest game in our group. We’ve got three points from the Morecambe game and hopefully we’ll get the same when we play Stoke at home. We want to get through and start making a path to Wembley.”

“For the goal, the ball came to me unexpectedly and I managed to get it out of my feet. I saw the keeper rushing out and I decided I needed to try to get my shot away early. Thankfully it went into the back of the net.

“I was looking to celebrate with the fans but they were really hard to see, and the floodlights were in the way as well, but I spotted them eventually. Giving them something to cheer about was a good feeling.”

Having set off on a mini-run of two goals in two outings, he revealed that the manager is keeping him on his toes with goal scoring targets.

“The gaffer spoke to me and he said that hopefully I’ll hit ten by Christmas,” he commented. “All I want is for us to keep winning, then it doesn’t really matter who scores.

“I’ve actually equalled my tally from when I was here last season. I’m just hoping to push on and carry that on. I also think it’s the first goal I’ve scored in the first half since coming back to Carlisle, so hopefully they’ll just keep coming.”

Speaking about the result of the game, he commented: “For all the good work we did in the first half it was disappointing to lose in the way we did. I thought we were playing well together as a team and all the lads who came in did well.

“Their second goal killed us a little bit because we were pretty much on top of them before that. They’d had a few chances, but I thought we were the better team and it would have been fair enough if we’d gone into the break at 1-1. That goal gave them confidence and they stepped it up a gear in the second half.

“They played some unreal football after the break, and they’d shown glimpses of it in the first half as well. In the end, and with all of the young players involved, it felt like we started to tire a bit as the game went on. That was me included in that.”

With Liam McCarron making his first start on such a big stage, the striker admitted that it was good to be able to help a young player as he starts to make his way in the game.

“It was great for Liam to start, and for Jack [Egan] and Sam [Adewusi] to come off the bench, because they’ve proved to the gaffer they’re good enough to be involved with the squad,” he told us. “I’ve trained with Liam before and we talk to each other quite a lot when we’re out there.

“We linked well straight away in the game and that gave him confidence, which was good. It’s a shame his shot was saved. Having players like that in the squad gives them great experience and I bet he’s really enjoying it at the moment.

“Playing at places like that is what you want more of in your career, and he’ll remember that for a long time. I wish our fans were a bit closer and a bit further down, just so we could see where they were. It’s a great stadium and an unreal feeling to walk out and I can imagine what it would be like when they pack it out.” 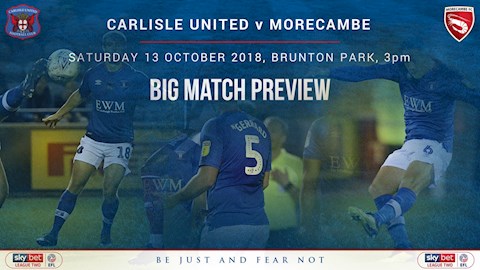 BIG MATCH PREVIEW: A look ahead to the visit of the Shrimps

Next up for the Blues is the visit of Morecambe on Saturday afternoon and a return to league action.

“We’ve been playing really well in recent games and last Saturday was exactly the result we needed,” he said. “Some of our best football has been played without picking up points, and it felt like that was the same from the first 45 minutes on Tuesday.

“It’s a big game on Saturday. Morecambe have been picking up some good results recently and they’ve been making their way up the table. That’s what we need to be doing as well.

“We know we need to try and make Brunton Park a fortress and make other teams worried about coming to us, instead of us worrying about the not having the home form we’re going to need.

“We are playing well so if we carry that on we’ll be winning more games than we lose.”

Click HERE to watch an interview with Ashley Nadesan on iFollow United now.