As we head towards the final month of the year we took the opportunity to catch up with academy boss Darren Edmondson to run the rule over the first five months of what has been a busy season so far.

YOUTH: Fixtures and results for the 2018/19 season

“That will stand them in good stead for next season. One or two of them are tired at the moment, but it’s something they’ve got to get on with because it’s the nature of the job they’re in.

“If you become a professional you can be playing Saturday-Tuesday for long periods in a season. I think with the more football you play you become better at it and more used to it. I’m very pleased with nearly all of the first years and what they’re doing, and how they’re going about it.

“Taking the last ten days or so as an example, three games in a week is tough, especially when there are a lot of the younger players taking part in them,” he continued. “We had an evening where we met the parents with the first years recently, and the discussion was mostly around how intense it is for them.

“They’ve been in school working towards exams prior to this, and they’ve gone from that into a six-day week, if you include college. There’s only a Sunday off for them, and mentally one or two are finding that to be quite tough.

“A boost for them is that they’re all watching Liam McCarron, and we keep telling them that it’s there for one or two of them to step up and be the next one. They’ve got to grasp it, they aren’t on a two-year holiday, it’s two years of working towards becoming a professional footballer.”

“With the second years, a few of them have had injuries and little set-backs, but they also see what’s happening to Liam and that has kept them full of enthusiasm and determination,” he confirmed. “They’ll start putting pressure on themselves as the decisions come closer, but they seem to be dealing with that well at the moment.

“November is always a weird month, I don’t know if it’s the dark nights, but they all become moody as we play a lot of games. It’s a good experience for them, because they have to keep going, even when they possibly aren’t feeling at their best.

“And, let’s be honest, at the end of the day they’re getting paid to do something they love. Without sounding disrespectful, they aren’t having to go into an outside environment and be up on a rooftop for seven hours of the day, or anything like that.

“They’ve got to motivate themselves however they can, otherwise they’ll get a kick up the backside and a reminder from us that this is a great opportunity that they’ve got to grasp themselves.” 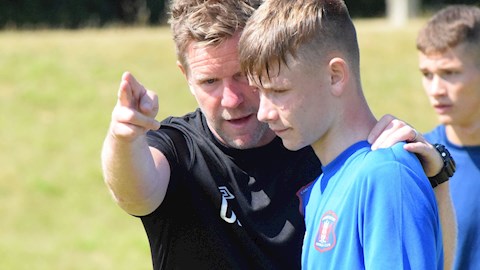 YOUTH: The lads have had a good week

With the club also five months in to the new relationship with the Durham-based Park View Academy, he explained how that partnership had already worked well for all concerned, with more still to come.

“The idea when I first spoke to Lewis [Pendleton], who is the director over there, was to look at how it could benefit both organisations,” he said. “They have some good first-year scholars, if you align them with our lads, and three of them have taken part in some of our games.

“That helps us, because it’s allowed us to keep our under-16s together for their training sessions and for their games on a Sunday. I think that’s important because the decision-making time is coming up for us on those boys, and we need to see how they play and work as a unit.

“We’ve also been able to bring a couple of 16-year-old lads in for trials, who have been around things at Park View, and we probably wouldn’t have known about them had we not had this relationship.

“It’s something that will get bigger and better and hopefully we might be able to get a professional footballer out of it. That’s the ultimate goal from it all, but we’ve already highlighted four or five scholars from over there who have shown potential. It’s pretty much panning out exactly as we all hoped it would.

“Effectively there is now a north-east window that we can take a look in to because of this, and we have to bear in mind that we don’t have the finances to have an extensive scouting system over there.

“This allows us to take a look at lads through all age groups, so all I can see is that it’s a win-win situation.”

Now into his third year as youth boss, he also confirmed that he’s learned a lot about the process of bringing young players through at a professional football club.

“It’s a great job and I thoroughly enjoy it,” he said. “There are stresses to it, of course there are, but they aren’t the same as the stresses you get in other managerial roles. It’s more about individual players than it is about results every week.

“You don’t face questions from the media and the fans about what you’re doing, and you aren’t getting slated on social media if things aren’t going your way. There’s less pressure that way, but the other pressures are still there because you have to be doing the job for a reason.

“It’s about trying to identify and develop talent that will help the first team. If we can keep finding a few more Liam McCarron style players then hopefully the club will benefit from it in the long term. That’s where our focus is, because it’s what the academy system is there to give our players the best opportunity of achieving a contract.”

Please note - this weekend's home fixture [Creighton] against Tranmere Rovers has been brought forward by 24 hours.