Academy boss Darren Edmondson gave us his reaction to the FA Youth Cup first round defeat at the hands of Fleetwood Town on Thursday night. 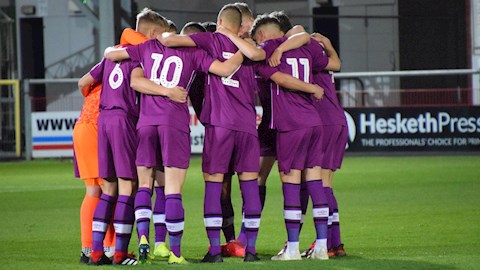 “I thought they were really good for the first 20 minutes, but then we got a little bit closer to them and we stopped the midfield three from dominating,” he said. “The rest of the game was fairly even after that. We got to grips with things and we started to look more positive.

“If we isolate their goals, one was a great header where he ran across both centre backs to get on the end of a great delivery and the other one was a thunderbolt. We’ll look back at it again to see whether that could have been stopped before the shot, but these are the fine margins in a game like this. Overall it was very close and it could have gone either way.”

On the number of quality deliveries into the box from his young charges, he told us: “That’s been the story of the season, to be honest. The set piece deliveries and crosses have been good, but we just haven’t had that bit of magic where somebody makes the run and flicks it into the net.

“It doesn’t always need big, brave headers. Sometimes it just needs a bit of cuteness where players give themselves a yard and that, in turn, gives them a better chance of scoring. We haven’t quite been able to get on the end of enough of those this year.

“On the night we just didn’t hit the target enough, we snatched at too much, and that’s been the difference in the game in the end.”

“The early goal could have hurt us bit I think generally everybody was very good in the way they reacted,” he continued. “We had a few suffer from cramp, which is probably due to fatigue from the mental exhaustion these games bring.

“Most of them dealt with it very well but I think it was a very good cup tie which was played in good spirit. The game had a very good tempo so we are disappointed to lose it.

“The lads have to take positives from it, and I know the second years who weren’t able to play and who were subs were disappointed, but I don’t think this game will be the one which decides if people get contracts or not.

“There’s a long way for all of them to go and nights like this are the glory games which come along every once in a while. We lost so we have to move on from it and make sure we get rest over the weekend so that we’re ready to go again next week.” 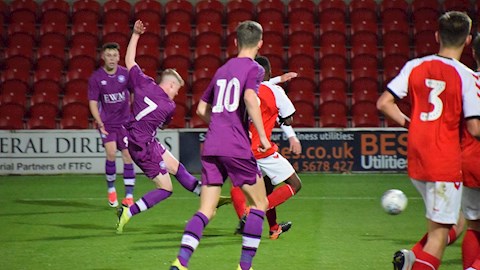 YOUTH: Report from the FA Cup first round game

With John Sheridan and his staff in the stands to watch the game, the academy manager admitted that was a great message to send to his young players.

“It’s fantastic for the boys to know he’s there and I’m sure they’ll have seen a bit more of one or two of my players from it,” he said. “They’ve been impressed by some of the first years already, and I think they’ll have liked what they saw from some of the second years as well.

“Obviously Liam [McCarron] is the one people are talking about and he scored a good goal. His calf muscles started to tighten towards the end, and that’s why we had to take him off. He hasn’t played too much football in the last few weeks so we didn’t want to run him into the ground.

“All of them showed flashes of what they’re about and they know they now need to maintain that consistency and they need to put some results together in the league. That will help us to make sure things keep heading in the right direction.”

On the early loss of Charlie Birch to injury, he said: “I think he damaged his medial ligament. It’s something that’s happened to him before and he tried hard to run it off.

“It became obvious he couldn’t do that, so we didn’t want to make it any worse for him.”