The Blues host Newport County at Brunton Park on Saturday afternoon and manager John Sheridan spoke about the importance of the end result following a run of five home games without a victory.

BIG MATCH PREVIEW: We take a look ahead to this weekend's game

“It would be good to get off to a good start in the game, but the most important thing is the end result,” he said. “Goals win you games, so we have to get back to putting the good chances we create away.

“We’ll be playing against a team that’s going well in the division, they’re very hard to beat, and they’ll come here wanting to carry that on. I worked with Mike Flynn, he coached under me at Newport, and he’s a good lad.

“He’s doing an excellent job there and he’s got a good work ethic with some decent players. They have a fighting spirit about them and when they lose a game they bounce back and go on a run.

“That’s why they’re at the right end of the table, so we know it will be a really hard game. They are where they are on merit, and I’m pleased to see them doing well because they’re a good club. Having said that, I’m only bothered about us. I want us to try and take the game to them. It’s one I know we can win, but I can talk a good game, it’s about going out and doing it.”

Speaking about what’s needed to change the results here at Brunton Park, he said: “I’ve said plenty of times before that we’ve got a good enough squad to be competing with the teams at the top of this league.

“We just need to go out with a bit of belief that we’re going to get the points. What we need is consistency and we know it’s about small margins. We were winning games and we were in a good position three or four weeks ago and I think it’s easy to get back to that in this league.

“The lads are hurting because of the run they’re on. People who don’t think they care are mistaken. One thing I can tell you is that they’re bothered and they care, and they want to try and turn it around as much as myself or anyone else.

“I know how we can play, I know we’ve got goals in us and I know we can win games. We can be up at the top end of the table, but the table doesn’t lie, and the results at home haven’t been good enough. We’ve got to go out and be brave, and we know the fans will support us if they see the players giving effort and desire. If you do that you’ll get your just rewards.”

On the current run of results on our own path, he commented: “I’ve lost games before, and I’ve lost my job before because of losing games, but I’ve never experienced five games at home with no goals like this.

“I don’t think I went through this as a player either, and that’s why I think it must be so hard for the people who come to watch. I don’t want my players hiding from it, I want them to show that bit of steel and character, go out and play the game by expressing themselves. At times like this you need to be brave and that’s what we’ll be talking to the players about.

“We know it’s very hard for the supporters to watch us at home at the moment, but they’ve stuck with us and I applaud them for that. There are one or two moans, but that’s fully acceptable because of the results we’ve had.

“With our shooting we have got to hit the target more. That’s been really disappointing in games because we’ve been getting good positions and wasting them. Somebody shouted at me and Tommy [Wright] on Saturday to ask if we actually practice shooting, and that’s something we do every day … and we’re actually quite good at it. However, that’s training, and for some reason we don’t hit the target enough when it comes to games. That’s another thing that has to change.” 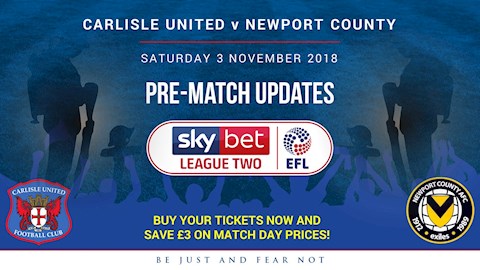 PRE-MATCH UPDATE: Match day information ahead of the Newport game

“We have one or two with knocks, but we won’t ever look to that to make excuses,” he explained. “If a player is missing he’s no use to me, as harsh as that sounds, and it’s up to whoever I pick to replace him to step up.

“With the players I have available I’m going into every game feeling we can win. That’s the way I was as a player and it’s how I am as a manager. I’m very positive that we can turn things round.

“The good news is that Danny and Jamie have both trained all week, so they’re available if I want to pick them. They’re two good, experienced players and it’s good to have them back.”

And another imminent addition to the backroom staff could be keeper coach Ross Ballantyne, who has been given a formal offer to consider.

“We’re in the process of making an offer to Ross so we’ll just wait and see what comes from it. It’s something we need sorted, so we’re working hard to get that done as quickly as possible.”