United boss John Sheridan spoke about what he expects to be another tough game ahead of the visit of Forest Green Rovers on Saturday. 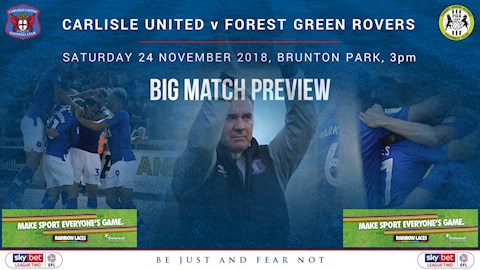 “Hopefully the players will have taken a big lift from what they did last weekend,” he said. “Coming out of any game with a result like that can only ever give you a boost.

“We’re on a little run now and with the position we’re in we know we’ve got to play a little bit of catch-up.”

“We want points on the board quickly coming into the busy period of Christmas,” he added. “The league table will start panning out a little bit as we play these games and that’s why it’s important to pick points up.

“I’ve said many a time that we’ve just got to concentrate on ourselves and make sure we do our jobs. We saw how much of a difference being clinical made last week, and that’s what the game is about. Hit the target, make the keeper work and give yourself the best chance of scoring.”

On what he expects from the opposition, he commented: “They’re a good team. They’ve drawn a lot of games, but they haven’t lost many either.

“They’re a good footballing side and they’re in a similar position to where we are. I just want us to look after ourselves and we all know the importance of getting three points, whoever we play against.

“Their approach is to try and play and pass the ball, and they want to get forward as much as possible. I’m sure they’ll look at our home record and think they can come here and get at us. I respect that because our home form hasn’t been good enough.

“However, and as I keep reminding people, if we look after ourselves I expect it to be a game we win. Both sides want the points to keep in touch with the positions above, so it should be an interesting one.” 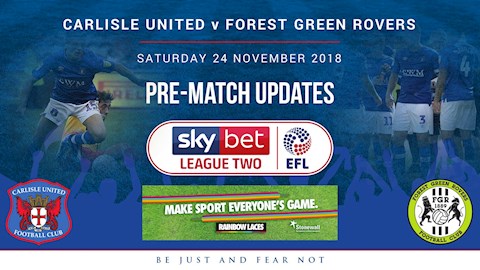 PRE-MATCH UPDATE: A look ahead to this weekend's fixture

“Our pitch is a big pitch and teams like Forest Green do enjoy playing on it,” he said. “We’ll go into the game respecting them, because we know what they can do on their day, but we also know we can cause problems as well.

“We haven’t hidden away from the fact our home form needs to be better. We’re keeping ourselves in touch because of the results we’ve been getting in the away games, but we do need to be doing it here as well.

“If we can stretch our run to seven or eight games we’ll be that much closer to the teams above us. I know that’s what the fans want to see. When you haven’t scored in five games and you haven’t been winning it doesn’t make it easy for the fans to want to come and watch you. I know they’ll come back when we’re winning games because that’s what they are desperate to see.”

And with the injury situation improving, he told us: “What seems to be happening at the moment is that we get someone back and then we lose someone else.

“Obviously I don’t want that, I want everyone fit and available, because we do have some big games coming up.

“Kelvin Etuhu is fit and available, but I don’t think Danny Grainger will be ready. Tom Parkes isn’t too far away. He’ll be another week, which is what I expected.

“Other than that, we’ve got a strong enough squad to get us a result, in my opinion. Everybody wants to be playing and involved so there’s a good feeling around the place.

“In my eyes we’re as good as any team in the division on our day, but the magic word is consistency. Leading up to Christmas I’d liken to be around the play-off places because it takes you into the second half of the season feeling positive.”