Boss John Sheridan gave us his reaction to the draw with Stoke City under-21s which meant the Blues exited the Checkatrade Trophy at the group stages shortly after the penalty shoot-out had ended at Brunton Park on Tuesday night. 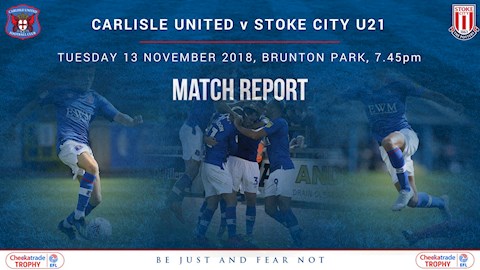 “This competition provides us with the best chance we’ll get of going to Wembley to win a trophy, so I’m very disappointed that we’re not still in it,” he said. “We’re just not clinical enough when it comes down to it.

“It was a spectacular goal from Jack [Sowerby] but we had three other chances where we should be scoring again.

“We’ve had chances which were bang to rights where we should be scoring and it makes it a totally different game if we do. When we were on our bad run we had chances in every game which could have turned things for us. We just aren’t clinical enough.

“Look at the difference when we took our chances against Newport. It gave us the drive to go on and win the game. We’ve had chances tonight which were bang to rights where we should be scoring, and it makes it a totally different game if we do.

“There’s never a lack of effort from the team, I can’t fault that, but it’s the fact that we don’t convert good chances into goals which is really frustrating me."

“I hear the crowd go ‘ooooh close’ when we haven’t hit the target and that drives me bonkers because we should be more clinical in the good situations we find ourselves in,” he continued. “That’s been a problem for us all season and I’m annoyed because there was an opportunity for us to go through to the next stage, but it just wasn’t to be.

“Like I say, you hear the crowd going ‘ooooh’ ‘aaaahhh’ and clapping the players when they’ve missed the target. You hear the players telling each other they’ve been unlucky – no, be strict and have the demand that you should be scoring more goals when you get the chance. We just don’t do that.

“I’m saying the same things over and over in interviews as well. We cannot allow the chances we create to keep being missed. The only time we took our chances was against Newport, and I don’t think we played well at all in that game. It was probably the worst we’d played in the last six home games, but we were ruthless and we won the game.

“I know the players care, but when they give another player a pat on the back or tell them they’ve been unlucky after they’ve missed a chance it drives me mad.” 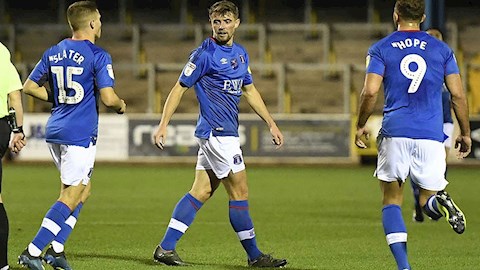 On what was a good performance from the away team, he commented: “Stoke are technically a very good side and their young players showed the difference in how they learn to take care of the ball.

“They really look after it and they were good possession wise. Having said that, and with no disrespect intended, I want people really hurting when they lose or when they aren’t doing things properly.

“They’re made up of 18, 19 and 20-year olds, so I told the players after the game that they need to look at themselves and think about that. I’m not trying to be hard with them because the effort was there, and we did play well in patches. It all boils down to us not being clinical enough. Like I keep repeating, people accept us missing the target and I’m not having that.”

Speaking more about being knocked out, he told us: “We want to be in every competition, but I possibly wanted us to win even more than I wanted the win at Crewe, because this really is a competition you can go all the way in.

“Adam Collin has made a good save in the second half, but other than that I can’t think of many other times when he’s been tested. They got their goal in the first half through us switching off and the header from their lad was clinical.

“We haven’t lost this game, but I want to get it into them how important winning is. Don’t accept anything less. On too many occasions the way we use the ball looks untidy, and it’s costing us.

“I’ve never belittled this competition. When I got there with Chesterfield the crowd was 60,000 and I know we’d have taken 30,000 from Carlisle. That’s why I’m disappointed not to be in it because it can be a good day out for everybody.”

More experience came the way of youngster Liam McCarron once the game went to penalties when he was told by the manager to get his name on the list of five takers.

He took the fifth, a very well finished spot kick, meaning the shoot-out had to go into the sudden death phase.

“Liam wasn’t going to take one, but I told him to,” the manager confirmed. “I wanted him to get the feeling of having to take one in that type of situation.

“It gives him the experience of it, and credit to him because he finished it well.”

Incidentally, the club’s youngest ever goal scorer is Rob Edwards who converted a penalty against Maidstone on 8 September 1990 at a tender 17 years and 250 days old.

Taking into account that goals scored in shoot-outs don’t appear as part of any official scoring record, and setting aside the various debates about the Checkatrade Trophy, it’s worth noting that when Liam hit the net last night he was 17 years and 251 days old. Well done from everyone at the club to Liam McCarron for that.