United boss John Sheridan gave us his reaction to the thumping 4-0 away victory at the County Ground on Saturday afternoon. 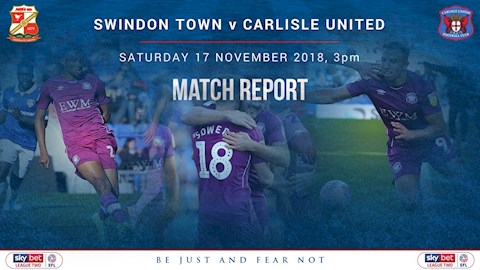 MATCH REPORT: Summary of the Swindon away game

“It’s nice to win any game by that margin but the most pleasing thing is the three points,” he said. “I thought we were clinical in this game and all of the goals were excellent.

“The first one was a very good move, with a decent finish from Naders [Ashley Nadesan], and it always gives you a chance when you score the first goal. If you then work hard to keep a clean sheet it gives you the momentum in the game.

“I thought we dominated once we got ourselves in front and we only really allowed them to get back into it through the last 10 minutes or so. I’d have been really disappointed if we’d let them score during that spell, because we’d worked hard for the clean sheet, but overall it was a very good performance.”

“Being honest, I’d say we were sloppy in the first 10 minutes as well,” he added. “I had to get a grip of one or two of them, but I thought we sorted ourselves out and we finished the first half on top.

“The two goals after half time were massive because it completely changed the outlook and it put us in the position to win the game. We keep going over it but I’ve been crying out for us to be clinical. We’ve seen how much of a difference it makes when you are, and how much easier it makes things when you take more care with your chances.”

Speaking again about the quality of all four of the goals, he told us: “They were very, very good goals, and that was after us speaking about the need for us to be more clinical.

“We’ve been ruthless when we had opportunities to score and it’s good to see. I’ve always known what these players can give me, and the biggest part of the frustration we’ve felt has been not taking the chances we’ve created in games where the result could have been so much more different if we’d done that.

“Ash [Nadesan] set us off on the right foot and that was a really good team goal. We’ve spoken about him before, and that’s eight for him already. He likes getting goals and his confidence will just continue to grow.”

“I’m absolutely delighted for Regan [Slater],” he continued. “He’s still a young lad and he’s here to experience a bit of first team football with us.

“I appreciate everything Sheffield United have done for us with him. He’s still only 18 but he plays in a way that shows he has the willingness to do the ugly things, as well as try to play with a bit of quality.

“I think he should be getting forward a lot more, because he has a good engine on him, but I thought his goals were magnificent. His first was a great strike and he’s taken his time with the second, even going past a few people on the way.

“He’s a young lad who is still learning his trade but you can see what a good player he’s going to be. Playing regularly isn’t doing him any harm at all. He’s only 5ft3, or whatever he is, and he weighs about 8st, but there’s just something about him that I like.

“He has an arrogance as a player and he thinks he’s 6ft5 when he’s out on the pitch. Chris Wilder is a good mate of mine and he’s let him come to us because he knows we’ll send him back to his parent club a better player.”

Splitting the brace from the young midfielder was a superbly executed free kick from in-form Jamie Devitt.

“Dev got a few of them last season and it’s a technique he does well,” he said. “I always say the same thing about free kicks - make sure you hit the target and work the keeper.

“It was a fantastic free kick and it left the keeper with no chance. Look, some individuals will get pats on the back for what they’ve done in the game, but I’m really pleased for the team.

“We sent them out in a formation that’s made us look more solid in the last few games. Sometimes when I play a three in midfield I feel a bit more comfortable that we’ll be stronger.

“It can be a decision as to which two play in you go with four through the middle, but I thought the two wide lads worked their socks off and we had players working hard for each other all over the pitch.

“That’s why we got the result. Today is one game, we want to see more of it, but I’m really chuffed for our fans. They go home happy and you can’t beat that. I just hope they’re singing my name at the end of the season because it’ll mean we’ve been successful!”

On the absence of club captain Danny Grainger, he explained: “We trained at Walsall on Friday afternoon and he felt his calf, so we left him out as a precaution.

“We’ll see how he gets on with that this week.”