Assistant manager Tommy Wright spoke about the frustration in the dressing room after the Notts County game having watched his team dominate, only to come away with a point from what was a solid away performance. 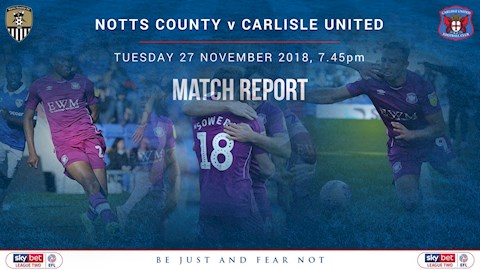 “You’d usually come away from home and be happy with a point, but I don’t think that’s the case tonight,” he said. “I thought we passed the ball well, but we could have had a better end product in the last third. Looking at it overall it’s a game we should have won.

“Possession doesn’t win you games if you don’t finish it off, that’s a fact. Obviously we do want to keep the ball, but it doesn’t mean much unless you put the ball in the back of the net.

“The good thing from the game was that we went behind but we came back. We kept going, we kept moving the ball quickly, and we had opportunities to win it at the end. I thought Richie Bennett should maybe have scored with his header, but I’ll need to look at that again, and I thought Ashley Nadesan had a decent chance just after they scored.”

“We wanted to move the ball quickly and we had a ten-minute spell in the first half where we created room for Dev [Jamie Devitt] to get a few shots off and get involved,” he continued. “We didn’t get enough men in the box on the end of crosses, and there were some good crosses put into the box.

“That was frustrating, but there was some good lead up play until we got to the last third. If we had a natural goal scorer in there, and that’s not taking anything away from the lads we’ve got in there now, they maybe would have got a couple of goals tonight.”

“You do get the feeling when you’ve been so much on top and you haven’t scored that it can come and kick you in the backside,” he added. “That’s exactly what happened, when they got the goal from a set play, and that was very frustrating.

“We went into half time level and we told the players that they had to concentrate and keep doing what they were doing. Again, it’s the first goal, and I think if we’d got it, we’d probably have gone on to win comfortably.

“The performance has been good but the result should have been better. I don’t think too many can argue with that. They have some decent players, but we’ve just switched off at a set piece.

“Football has a habit of slapping you when you haven’t taken your chances and you’ve been the better side. It was the lack of quality in the final third which cost us the chance of going on to win the game.”

Speaking about the level of domination United had in the game, he said: “I think you can see where we want to go and how we want the team to play.

“There were players who wanted to keep getting on the ball even when we went behind. That’s good, because we want to see the players playing well, but the thing we want more than anything is to win football matches.

“We haven’t played as well as this and won games, but that’s just football as well.”

The Blues went with a flat back four, a change from Saturday’s back three, with the opposition in mind as they looked to counter the threats they expected to face.

“We might have used a different formation if Stead and Hemmings had been fit, because that would have meant they would use a different system,” he explained. “They weren’t involved so we knew Dennis would play up top on his own.

“That meant there was no point having three, because it can lead to getting overcrowded in midfield, a bit like what happened on Saturday. I thought the system we used worked everywhere, we just didn’t score enough goals.

“With the subs I thought they all made an impact. Liam McCarron came on and he’s a player who excites people. Wingers with pace get at people, and the full back was a bit frightened of him early on. He was standing off him, so I was trying to get the message across to him that he didn’t need to beat the man every time.

“If he’s standing off you just get the cross in early. That’s exactly what he did for the goal and it was great movement from Jerry Yates to finish it off. I’m really pleased for him that he’s scored his first league goal for us because he’s one of the hardest working players I’ve ever worked with.”

On the manner in which the equaliser was scored, he told us: “We haven’t had enough of those and it’s something we’ve spoken to the players about.

“The goals we score tend to be stunners, which is fine, but we also need to score more of the ugly type of goal as well, because we do put a lot of good crosses into the box. In a lot of cases it’s about concentrating on hitting the target, but hopefully we’ll see more of that kind of thing.

“As we’ve said, it’s good to play well, but this game is all about end product.”