Assistant manager Tommy Wright gave us his reaction to the home defeat against Forest Green Rovers shortly after full time on Saturday afternoon. 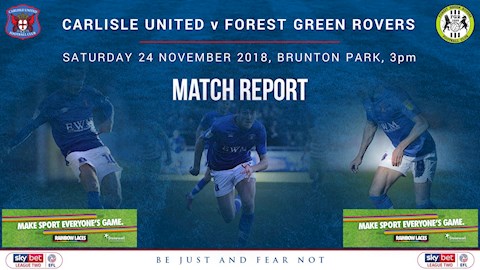 “It was disappointing because we worked on how they would play,” he said. “We know they’re a talented team who keep the ball and they’re technically very good.

“We sat back too much in the first half and we gave them too much time on the ball by not pressing them enough. We had one or two opportunities after that first half hour, because we got closer to them, but we needed to have started the game better.”

“It was more huff and puff in the second half but overall I thought they were the better team on the day,” he continued. “As we’ve said before, the first goal is massive in this league.

“If you lose that first goal it sets everybody back. We were happy to get in at half time at only one goal down, being honest, because they were definitely on top.

“The manager changed the shape and it looked a bit better. We became more forceful, even though at times it was too direct. We created chances, but the second goal really killed it for us.

“We’ve had one cleared off the line, the keeper made some good saves, we hit the post a couple of times but, to be fair, I thought they were probably the best team we’ve played this season and they deserved the points.”

“Without doubt we made that game an uphill struggle for ourselves,” he commented. “We knew what they’d bring, and they took care of the ball in exactly the way we’d talked about. We were just too lethargic in our closing down and we paid the price for that.

“We were far too easy to play against and consistency is the magic word with all this. We’ve been here before and I’m sure we’ll have the same conversations again. Some of the results are strange in this division but we failed to deal with what is one of the better technical teams in the league.

“There was some better stuff from us in the second half, but you can’t give good teams a 30-minute start in any game, but that’s what we did.

“Looking at the positives, I thought Sowerby and Slater were terrific. We created some very good chances which could have earned us a point – whether we would have deserved that or not is another matter.

“It can feel very negative when you lose a game, and if you win everything is positive. That’s why we always look at the bigger picture. We know we can play, we’ve seen us beat good teams, and we have to make sure we do everything we can to help us to produce that more often than not.”

Heading into another busy week, he said: “It’s a long season so we take this on the chin and we move on. We have some big games coming up and that’s where our focus will be now.

“We’ve got to keep things in perspective, but we have to pay Forest Green credit because they played some great stuff.

“Losing is frustrating, but sometimes the simple things in football can be the hardest to do. That shouldn’t be the case, but it is, and all you can do is make sure you’re better next time round.

“We keep speaking about it, but our home form is letting us down at the moment. These things happen, you get knock-downs in life, and you have got to bounce back. I know it’s difficult, but all we can say to the fans is to ask them to keep being positive.”

Speaking more about the system adopted by the visitors, he commented: “Forest Green have been working at the way they play for two seasons now and they’ve got good technical players.

“They bring players into the club who they know can play that way. That comes down to recruitment. They know they aren’t going to change the way they play so when they get a new player they look to make sure he fits into that style. It becomes ingrained in the club and it starts to come naturally.

“Mark Cooper has done that well having had a couple of seasons to put it in place. I always think you need two or three windows to get the team you want. We’ve had one, which was a late window, and this isn’t me making excuses. That’s just how it works.

“We probably need a couple of more transfer windows to get what we’re really looking for. We’re working hard on that and I don’t think we’re too far away.”