We spoke to midfielder Jamie Devitt following his 90th minute winner against Crewe in the FA Cup on Saturday - a huge ricochet from a miscued clearance from Alex stopper Ben Garratt which secured a round two place for the Blues.

“I think that goal was probably the best one I’ve scored!” he joked. “You earn that luck, and I think when you look back at the chances created throughout the game we probably deserved to win it.

“I ended up chasing down the keeper because I took a bad touch, which took me into the box, so I thought I had to keep going rather than make it easy for him to clear it. I got that little bit of luck, so I’m happy."

“There's no better feeling than scoring a goal that late to win a game," he told us. "We said it last week, and it’s the same again this time. The fans follow us everywhere in great numbers so it was great to be able to celebrate in front of them so late on.

"They’ve been brilliant, and we haven’t given them loads to cheer about this season yet, but hopefully we’re on the up now after two good wins."

“It’s good to be in the hat for the second round and we’re all looking forward to seeing who we get," he commented. "We said before the game that the most important thing was the result.

"I think everyone will be the same, but we’d just love a home draw against anyone because we want to be in the hat for the third round."

On the workmanlike manner of the victory, he told us: “There aren’t many teams who can go away from home and win easily.

"You need to grind it out, slow the game down and sometimes just be horrible really. I thought we defended really well and we created some good chances as well.

“It was important for us to back up the result from last week. There was no point winning against Newport then going t Crewe and taking the foot off the pedal. You could see how much we wanted to go through and I think that showed in our performance." 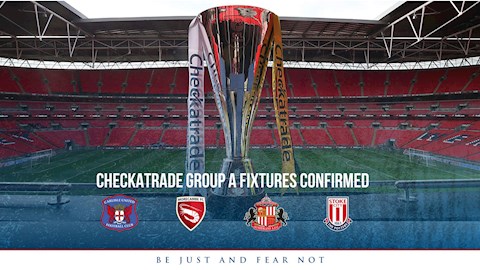 And on his current form, which has seen him score three goals in two starts since his return from injury, he said: “When we spoke after the Yeovil game I was critical of myself, because I came on in that game and didn’t do well, but that’s been put to bed now.

"It’s nice to be back involved and contributing to two wins in the last two. As a team we all want to get on a run now. We’re here to win games, that’s our job, and long may it continue.

"Tuesday night is the Checkatrade Trophy but it’s another game that we can win, so that’s what we’ll all be looking to do. It becomes the biggest game because it’s the next one, and hopefully we’ll get the result to get through to the next round of that competition as well."

Click HERE to watch an interview with Jamie Devitt on iFollow United now.