United captain Danny Grainger spoke more about the manner of the dramatic win over Newport County which saw the Blues bounce back from having conceded a late equaliser to claim a late victory with a stunning crisp volley from his very own trusty left boot. 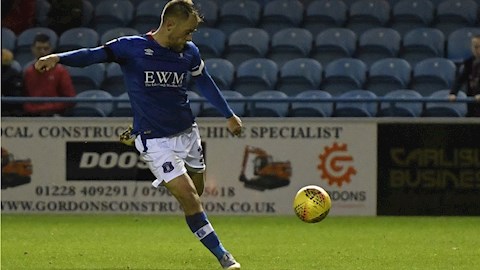 INTERVIEW: I could tell it was a good one

“I think some of the fans probably thought we’d just come away with a point after they’d equalised,” he admitted. “We didn’t feel that way because we always know when we’ve got the likes of Ash [Nadesan], Jerry [Yates], Jamie [Devitt] and Benno [Richie Bennett] at the top end of the pitch we’ll always get one more chance.

“We had two or three chances just before they equalised, so we knew we’d get another one. We need to get used to killing teams off and being ruthless with them because we got away with not doing that at the weekend. What we have to consider is that it will come back and haunt us on other days if we don’t properly put teams away.”

“There will be other games throughout the season where we get one chance, score one goal and come away with a 1-0 victory,” he added. “We need to take more of our chances, but we aren’t worried because the important thing is that we’re creating them. We scored three goals on Saturday and we could have easily scored even six goals, if we’d been ruthless.

“Newport probably could have had another couple of goals as well, if that’s how you’re looking at things, so we’re just pleased to be coming away with the three points.”

Things certainly set off on the right foot at the weekend with two goals in the space of three minutes from Jamie Devitt which gave United a cushion, as well as helping to cast aside anxieties over the recent home barren spell.

“I think it was good that we got the goals early in the game because it gave everyone a lift,” he said. “When you’ve got players like Dev in the team you know they’re always going to score and create goals.

“Dev is probably his own biggest critic, but he’s scored some really important goals for this club since he arrived. He’s shown today that he can get in the box and score in tight areas, as well as score great goals like his second.”

To see the side pushing for the winner, having been pegged back so late in the day, was testament to the much talked about character in the dressing room and the determination to get more than just a point from the day.

“We’ve got a lot of character in the team,” he agreed. “When you look at the spine of the team, you’ve got Collin, Gerrard, Liddle, Jones, Devitt, and myself, who have all played a lot of games between us.

“You’ve just got to settle yourself down once you concede that second goal and make sure you go again. At 2-0 we were saying we had to make sure we didn’t take our foot off the gas, which I don’t think we did. I thought we kept them penned in and should have been further ahead at half time.

“When it went to 2-1, we knew the wind was going to be with them and that they’d be knocking on the door for the whole of the second half, but we didn’t crumble. I thought the lads stood up well to it. They did get their goal in the end but we bounced back fantastically.”

“I’m sure it was entertaining for the fans to watch, but it felt nice when the full time whistle blew, I’m not going to lie!” he joked. “I’m sure the fans would take a 3-2 win in the last minute every week if you could guarantee it, but we wouldn’t mind a couple of 1-0 wins!

“Three points are the most important thing, and we knew if we could get the goals the confidence would come back and the result would follow. I think the manager set us up well and he told us he’d done it to make sure we scored goals. I thought we looked threatening at every opportunity.

“It was a bit like a basketball match at times, with both teams attacking. The wind coming from the Warwick end made it difficult, because it can mean you get pinned in, then when you try and play it long it can hold up and almost come back at you before anyone has touched it.”

The important thing now, as he said himself, is for the lads to get on another run as they look to secure cup progression and climb up the table.

“The period we’ve got coming up is a big period in every season,” he commented. “We’ve got cup games and things like that, but the period from now until the end of January, when the window shuts, is the time where you can really start to nail down which way the season is going to go.

“Hopefully we’ve had our little blip, and even with the poor home form we still aren’t far away from where we want to be. If we can put a good run together we’ll work our way up there.

“It’s a tight league this year so I think anybody who puts a run together can get right up there quite quickly. Lincoln seemed to be running away with it, but they’ve had a little slide and they’re getting dragged back into it as well. We want to find that consistency now so we climb up the table again.”

But it’s a break from league competition as the Blues face Crewe Alexandra in the Emirates Fa Cup first round on Saturday.

“The FA Cup is a fantastic competition,” he said. “It’s a big game at Crewe and I think it’s important to put pressure on yourself to make sure you keep winning games.

“You want to have that excitement as you progress through the rounds. It’s brilliant when you’re watching the draws and your name is still in the hat.”

One last word was for another acknowledgement of that hammer left foot which has seen him become one of the few players to pick up the Sky Sports Goal of the Weekend award on two separate occasions.

“It’s nice, I won’t deny that, but the important thing is always the result,” he said. “I’d take not scoring many more goals at all if the team was winning every week. I like scoring, every player does, and it’s good when you get nominated for goal of the week, or whatever, but it really is about the team winning and picking up points.

“At the end of the day nobody cares if you have a lot of numbers in your goals scored tally. It’s where the team is in the table that really matters. Having said that, you do get a lift when fans vote for you in things like that and, with it being the winning goal, it’s nice to look back on.”