The first round proper of the Emirates FA Cup kicks off this weekend and United will play their part when they travel to Gresty Road to face Crewe Alexandra.

Alex were on a run of just one defeat in six games heading towards the end of October, but a 3-0 home reverse at the hands of Mansfield was followed by last week's 2-0 loss at Northampton, so they'll be looking to put those back-to-back defeats to bed as quickly as possible.

Good news came for The Alex recently when veteran striker Chris Porter confirmed that he'll be staying with the club until the summer of 2020, following the triggering of an extension clause when the club played against Stevenage, and United fans will be looking forward to seeing former-Blues Shaun Miller and Michael Raynes once again.

Two players who will need to be watched are Jordan Bowery and Charlie Kirk. Bowery has five goals to his name and leading assister Kirk has weighed in with four goals and four assists thus far. 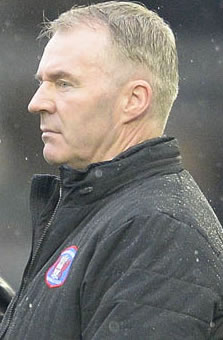 Speaking ahead of the weekend game, manager John Sheridan said: "It's a competition we want to do well in. As I said when the draw was made, we would have preferred a home game, but this is a relatively short journey and it's a game we're going out to win.

"I thought it was quite close at Brunton Park earlier in the season and both sides created good chances. We're aware of what they have in terms of attacking threats, and we know they're a decent footballing side when they get going.

"We'll need to show a positive approach and whoever we pick, with the availability and injury issues we have, we still feel we have a team that can win us the tie.

"It was obviously good to get the home victory in the manner we did last weekend and hopefully we'll take the high we got from that into this weekend's game.

"The FA Cup is an excellent competition and, like I say, we want to go as far as we can. If we concentrate on ourselves and work hard to deal with what Crewe throw at us, we'll give ourselves every opportunity."

+ The ‘Alexandra’ in the club’s name comes from Princess Alexandra, the Queen of England at the time of their formation.

+ Crewe’s first cup success actually came in the Welsh Cup, which they won in 1936 and 1937 before being banned from the competition.

+ In 1995, the Railwaymen went 56 games without winning away from home, until a 1-0 win at Southport stopped the rot.

The sides have met regularly over the years – 89 times in total – with United having won 39 of those encounters to Crewe’s 36.

Our most recent meeting was at the end of August, just five games into the current campaign. It was a match of ups and downs for the Blues as they played good football, with Hope and Yates going close early. The down side for the Blues was the loss of Grainger and Fryer to injury, but Ashley Nadesan left everyone smiling when he grabbed the winner and his first goal of the season with 20 minutes left to play.

Last season went the way of the Blues with goals from Danny Grainger [2], Reggie Lambe and Hallam Hope added to by an own goal from former-Carlisle centre back Michael Raynes, which combined to give United a comfortable 5-0 away victory back in September.

The home game in January was a much closer affair, with a late strike from Sam Cosgrove the difference between the sides.

Our referee for this game is Mr Lee Swabey. Lee has taken charge of 12 games so far this season showing 39 yellow cards and two reds.

We last saw him for our away trip to Newport in December last season. A thrilling encounter saw the sides eventually settle for a share of the spoils off the back of a 3-3 stalemate.

Luke Joyce sparked a much better second half for United, after the Exiles had taken the lead just before the break, when he scored from very close range.

But it was nip and tuck the rest of the way and strikes from Tom Miller and Kelvin Etuhu were needed to make sure Carlisle had something to show for their efforts. No Carlisle names were taken on the day.