A 40th minute strike from Stacey Harkness-Grant was the difference in a one-nil win for Tracy Gannon’s side to retain the trophy for United.

Harkness-Grant’s goal, which will go down as one of the strikes of the season at Brunton Park, came at the end of a first half in which the Lady Cumbrians had asserted themselves but been otherwise unable to find the breakthrough.

After United were escorted onto the pitch by players from the Under 8s, 9s and 10s teams from their Partner Club, Allerdale Girls, it was Penrith who manufactured the first opportunity of the half, winning a corner after an effort was blocked only to see the resulting kick safely pouched by Alice Heaton in the United nets. 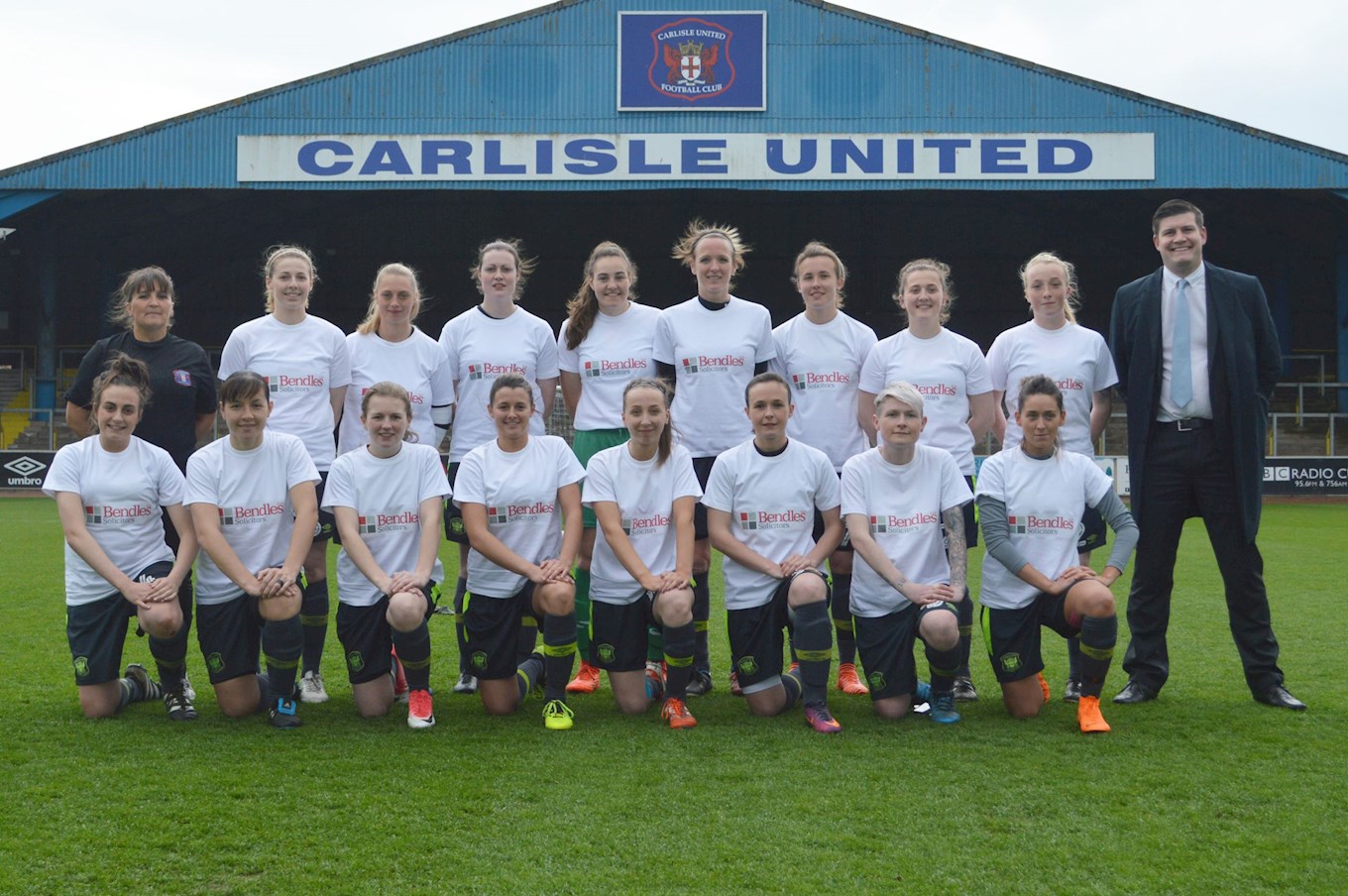 The first clear-cut chance for Gannon’s side came in the 16th minute and fell to the season’s top scorer, Kerri Mallinson, who showed an excellent touch to control the ball before swivelling to shoot into the arms of Penrith ‘keeper Michelle Jones.

This galvanised a United side who had played nine games since the beginning of April in the build-up to the encounter. They were showing no signs of any fatigue, however, as next it was Chelsie Browbank to try her luck, cutting in from the left wing and hitting the post from an acute angle.

The third chance of this purple patch fell the way of Gillian McGimpsey but she couldn’t connect with an incoming 19th minute corner and saw her penalty claims waved away to keep the scores level.

Penrith’s Nat Broad saw a 21st minute free kick taken safely by Heaton before Melissa Mallin failed to trouble Jones with a free kick at the other end of the pitch after Sarah McCabe had been fouled around 30 yards out.

Despite sustained pressure United had yet to break the deadlock and it looked as though they might fall behind on 39 minutes with a pair of goalmouth scrambles from Penrith before the ball was finally cleared away.

This was all forgotten just a minute later, however, with an excellent move which resulted in a magical and match winning strike. The passage of play was started by Heaton who kicked upfield before the resulting header back was picked up by Georgia Smethurst.

The United defender threaded a ball over the top to Mallinson who did well to hold play up before laying off to Harkness-Grant who took a couple of touches and, seeing Jones off her line, launched the ball from around 40 yards into the back of the Penrith net.

That took United in one to the good at the interval after an excellent 45 minutes from the Lady Cumbrians who could have counted themselves unlucky not to be further ahead.

Both sides were out early for the second half, eager to get underway and it showed in the opening exchanges with a Georgia Campbell effort fired high for Penrith in the opening minute before a shot from distance from Sharina Robinson went wide of the right-hand post in the 53rd minute for United.

The staggered introduction of Bea Barber and Carly Stevenson gave the Lady Cumbrians fresh outlets up front whilst the entry to the fold of Ciara Bland reinforced United’s midfield with Mallinson, McGimpsey and Browbank the players making way.

Heaton was next called into action for United just short of the hour mark as Jess Nelson was given space on the edge of the area to chip the ball goalwards, but it was palmed down by the stopper and on the whole the United defence were holding strong with excellent work in particular by Amy Hunter to restrict the opportunities for Penrith leading scorer Broad.

As the half progressed the game began to open up further and United were enjoying space on the wing allowing Emma Blenkinship to provide service for Barber and Stevenson, with the latter firing high of the mark on 73 minutes.

Penrith pushed for the equaliser as the game entered its final passages and perhaps their best chance came on 80 minutes as Broad shot through the United backline albeit wide of the mark. As the clock ticked down Gannon made her final roll of the dice, introducing Cally Martin and Laura Webster and her side were made to play out six minutes of additional time before the final whistle rang around Brunton Park.

United Captain Sharina Robinson was named Player of the Match for the second time in as many seasons before stepping up to lift the Cumberland FA Women’s County Cup for the third time in four years in front of a record crowd of 403 at Brunton Park.

Speaking after the final whistle United Ladies Manager, Tracy Gannon, said: “I’m so so proud of the girls’ performance tonight. They battled hard for the whole game and supported each other throughout.

"We knew it was going to be tough, especially on that size of pitch, but the girls coped with it really well. Despite the tiredness through the volume of games leading up to the Final, they excelled themselves again.

"We created some good opportunities and in the 40th minute Stacey [Harkness-Grant] did what she does well - saw the ‘keeper off her line and struck the ball scoring probably one of the best goals seen at Brunton Park this year. It’s great that the girls were rewarded for all the hard work they’ve put in this season.” 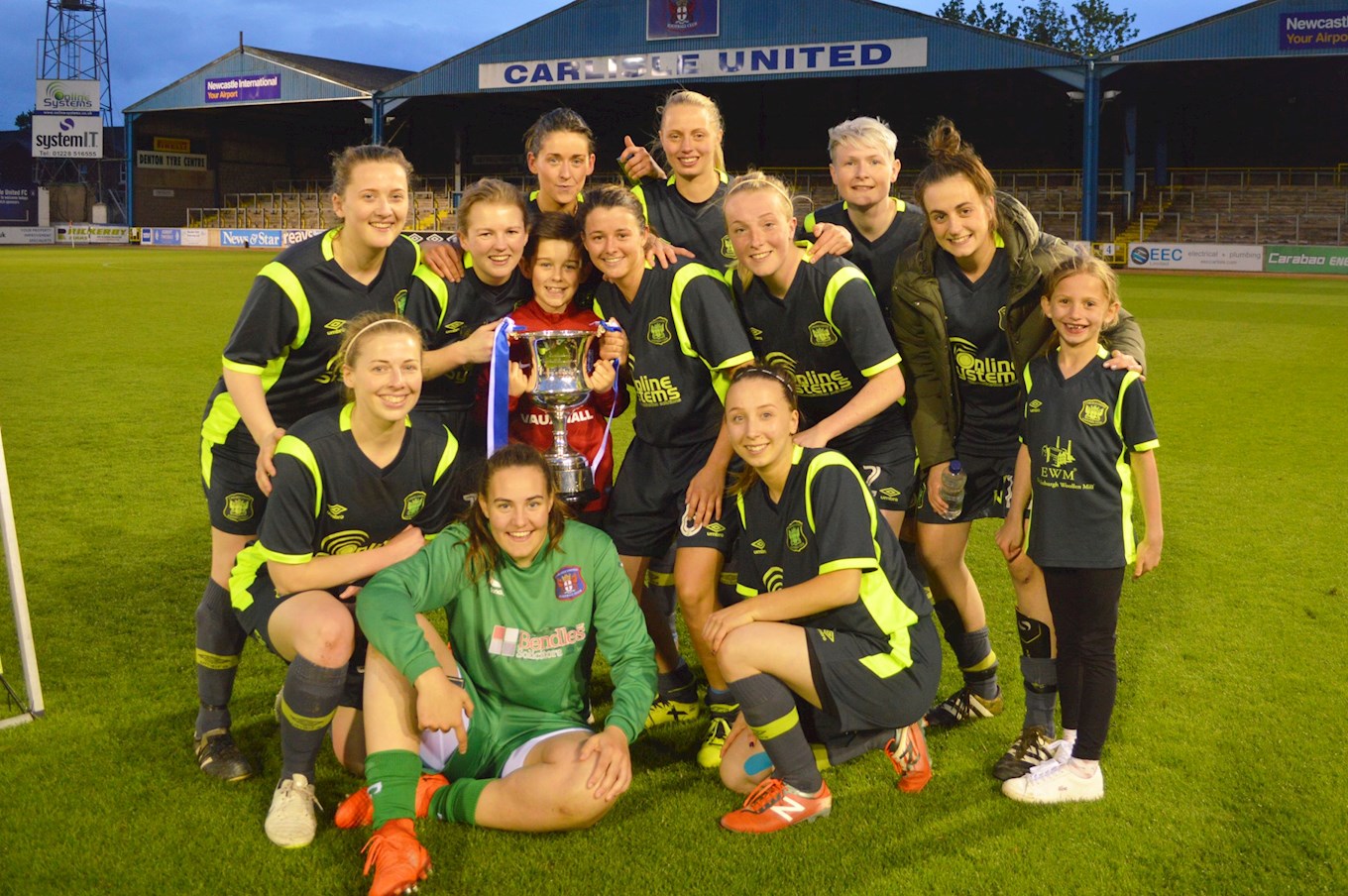 LADIES: Fixtures and results for the 2021/22 season

LADIES: Back the Blues this season with match day or player sponsorship


Carlisle United Ladies are delighted to be able to offer you a chance to join our team this season with a range of sponsorship packages to suit both businesses and members of the Blue Army alike.


Carlisle United Football Club is delighted to hear that the Carlisle Racecourse Inspirational Woman of the Year for Ladies Night 2020 is Tracy Gannon.