United boss John Sheridan gave us his reaction to the away defeat at MK Dons shortly after full time on Saturday. 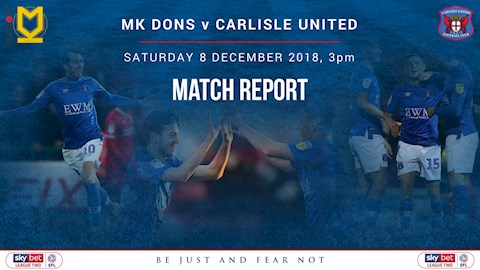 “It’s disappointing because we’re repeating the same things over and over at the moment,” he said. “The first goal in this league is so important, and we should have scored just before half time.

“They had one cleared off the line, so it was even-stevens, and there wasn’t too much else going on in the game because we cancelled each other out. I felt comfortable with how it was going into half time.”

“I feel as though we just shoot ourselves in the foot,” he added. “I’d like the players to have a bit more belief in themselves because I certainly have the belief that we should be higher in the table and we should be looking to get out of this league.

“I’m not being hard on them when I say that I don’t know if the players have that belief in themselves. If anyone is watching us, they’ll be thinking we aren’t a bad side, because we show what we can do in patches.

“As I’ve said, whoever gets the first goal is the team that usually goes on to win it at this level. The difference in this game is they were clinical with the two chances they got. With both of them we should have done better and reacted quicker to the situations that unfolded.”

“For the first one we had numbers waiting in the box for the ball to come in, instead of getting out to deal with it and closing the gaps,” he explained. “We should react better and pressure the ball sooner. That’s why it ended up in the back of the net.

“The second goal was a good ball from Lewington into an area where strikers like to be. It was very similar to the one we missed in the first half.

“Hallam [Hope] has said in the dressing room that he knows if he’d scored that chance it’d have been a different game. Lincoln, MK Dons, Colchester ... they all score that kind of goal. We don’t and it’s costing us.

“On the occasions we have done it we go on to win the game most of the time. In a tight game against a team who are unbeaten at home, you have to take those chances. I keep saying, we nearly do this, and we nearly do that, but that isn’t good enough.

“It was a good chance because it’s a game where we weren’t creating too much. It would have been a magnificent goal from a great passage of play. They didn’t have too many good chances either, but they took them.”

On the overall performance, he said: “They kept the ball better than we did. We gave it away far too easily when we were in good areas high up the pitch.

“The final ball, the lack of control, or not reacting when you’re inside the area to good chances that come your way means you don’t score goals. It’s the clinical edge we lack and it’s the biggest thing that’s letting us down.

“We were trying to go forward at the end but it’s easy when you’re two down because the opposition take their foot off it. We’ve played the team at the top of the league but we haven’t been outplayed or battered. We were right in the game but the difference is they’ve taken the few good chances they had.”

“I keep saying, sometimes we create problems for ourselves, and that’s frustrating,” he continued. “There was very little between the teams, but the goals change the game. We’re very naïve in some of the things we do out on the pitch and you do get punished for it.

“The lack of goals is a real concern. Our overall play is good, so it’s down to that final bit and being better inside their box. They were better than us possession wise and that’s because we give it away in situations when that shouldn’t happen. We were in good possession for their first goal, and giving it away gave them the drive to attack.”

An early spanner in the works for the Blues was when wide man Jerry Yates left the field of play with just 11 minutes on the clock as he signalled that he was struggling with the bang to his hip picked up the previous week during the Lincoln game.

“It’s a dead leg type injury in the hip area,” the gaffer said. “It’s tender and sore, and it was affecting him.

“He trained on Friday and he was fine, but he was trying to go flat out and it bothered him. I could have brought Danny [Grainger] on, but he’d only been training since Thursday.

“Tom Parkes came on and he probably hasn’t trained enough, being honest. He had to get involved much earlier than we anticipated. Jamie Devitt was another, he only joined in on Friday, so these lads weren’t quite match tempo ready.

“Another week will do them the world of good because they’ve trained very hard to get back to fitness.

“We took Ashley Nadesan off because we needed something different up front. I’m not saying anything bad there, I could have brought anyone off to try to change the game.

“I put Richie Bennett on then we didn’t play to his strengths. He has height and presence, but we spent too long passing the ball sideways and we didn’t utilise him enough. It’s all fine margins and we know if we start taking these chances things will be so much better for us.”