The lads were in for their last training session ahead of the visit of Santa this morning and manager John Sheridan confirmed that he’s continuing to concentrate on one game at a time as preparations to face Oldham were finalised. 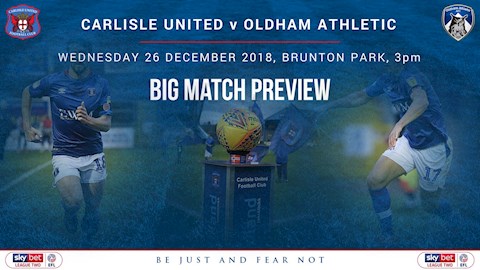 “We’ve got games coming thick and fast now, but the next one I’m concentrating on is Oldham,” he said. “I’ve told the players to do the same. Oldham area decent side but it’s a game I’m looking forward to because we’re at home and I expect us to win.

“When you have a winning team and you’re playing well you don’t change too much, but we’ll look at them and we’ll respect them and I’ll send a team out that I think will do a job.

“It’s an interesting one, because of my connections there, but it’s just another game I want us to win. We’ve obviously played them and got a good result at their place, but this is a completely different game.

“We’ll have to work hard, as we have been doing, and we’ll look to keep playing the type of football which has been getting us goals and wins."

“They’ll probably bring a big following, so it’ll be a big game,” he added. “With it being on Boxing Day it’ll have a good atmosphere and it’s a chance for us to get a bit of a run going. I’ve said recently that I don’t want to the team that wins one then loses one.

“I want us to be consistent and, if the players keep working the way they are, that will come. This is a game that will test us but I’m looking forward to it.”

Having had the lads in on Christmas Eve, he explained: “We trained this morning because it was our opportunity to get everybody ready for Boxing Day.

“The players enjoy the session, because they know they then get away to enjoy their Christmas Day. I do think it’s important that the players get chance to be with their families. They’ll do that right but, when you’re a footballer, you know what the important thing is.

“I know what my job is as a manager. I’ll have a nice time with my family. but we have to be prepared to face a tough game. I know that will be the case come Wednesday.”