United boss John Sheridan gave us his reaction to the hard-fought home victory over Macclesfield Town shortly after full time on Saturday afternoon. 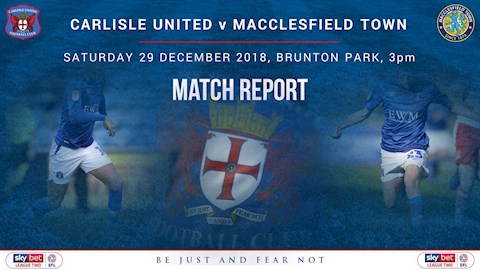 “It’s probably the opposite of what’s happened in the last couple of games,” he said. “We weren’t at our best by any means, but these are the results which sometimes matter more.

“I’ve always said that if you’re not playing well, but you can win a game, it’s a very good sign. We’ve dug in but Macclesfield made it very difficult for us. Sol [Campbell] has got them very well organised and they have some very good players in their team.

“I think they’ll be moving out of the bottom two soon with the way they play. It’s one where a draw was probably the right result, but I won’t argue about the fact that we sneaked it.

“I honestly don’t think we played well. We’ve probably been a bit spoiled with the goals we’ve scored of late, but we got another two to add to it, so we can be pleased about that.”

“Winning the game is the most important thing in my eyes,” he insisted. “I always want us to play attractive football, but full credit to the players for getting us to four wins on the spin.

“It’s a great return from them from the Christmas period, it isn’t an easy thing to do, and we have another big game coming up now at Morecambe.

“I just felt that the run of games caught up with one or two of the lads in this game. I thought you could see that towards the end and, in fact, we didn’t start well either. We were very slow, but I’ll just look at the result and see it as a very good three points.”

On conceding so early in the piece, he commented: “It was a symptom of how slowly we started the game. Anyone watching would have thought Macclesfield were the team at home.

“This is why I do get frustrated, and it’s why I keep saying that we have to keep people on their toes. That’s why I have to be who I am, but I’m probably a lot quieter than I should be.

“I’m trying to leave it up to the players more than anything. I want them to take a bit of responsibility and sort each other out.

“To be fair, we reacted well to going behind and we scored a great goal. Hallam [Hope] finished it off fantastically well.

“More than anything I wanted them to get to win so they could take it to Morecambe. I wanted them to go there in a strong position in the table and, with nearly 2,000 Carlisle fans there to watch us, it should make it a good day.”

“If you keep winning in this division you just know what will happen,” he commented. “The win puts us closer to the teams above us. If we keep doing it one game at a time that will continue to happen.

“With this game, we haven’t been the better side, but we’ve ground it out. If I look at a team like Lincoln, they’re top of the table because they win games in the same way as we won this one. They keep going and they make sure they keep creating chances.” 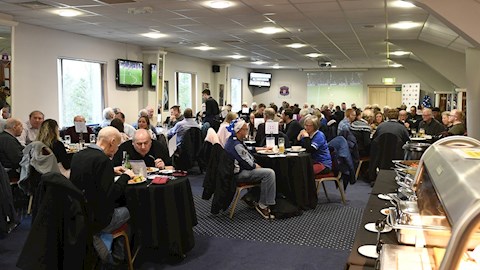 HOSPITALITY: Watch the Mansfield and Cheltenham games in style

With the winner coming from another close range finish, he said: “I think it was Danny Grainger who crossed the ball and Jerry Yates got a chance in the box because he gambled and he got himself in there.

“It was a massive relief for everybody when it went in, and there’ll be a debate over whether we deserved to win or not. We could have scored a few more, so could they, and we’ve ended up winning the game, so I’m going to take it.

“The thing with Jerry at the moment is that he’s scoring striker’s goals. They aren’t spectacular, but he’s getting into dangerous areas and it’s going for him. He’s got Hallam playing well beside him, which is good to see.

“I want so see Hallam joining in more as a striker. I don’t want him stuck out wide too much. He has goals in his locker, he proved that last season, and that’s why it’s important when the ball is on the other side of the pitch for him to gamble a bit.”

Having turned an early setback into a winning result, he said: “That shows a bit of character from everybody. I said to them at half time that they’d come from a goal behind and that we’d shown a good response.

“I told them to think about what it would mean to get three points, because it would take them into the new year in a strong place. We did what we had to do, it was a bit ugly, but we got there and we got the points.

“Being honest, it was a sloppy game and we didn’t keep hold of the ball as well as we usually do. Grinding results out is something we’ll have to do again as we go through the season, so it’s good to now it’s something we can do when we aren’t getting some of the basic things right.”

With the January transfer window now just 24-hours away, he said: “Hopefully things will get sorted out with all of the lads soon. Unfortunately with loans, things can happen last minute, but we have high hopes that everyone will be signed up shortly.

“I still need to speak to Adam Campbell. He won’t be able to play for us against Morecambe, so he needs to decide where he’s at. I don’t think it’s right just to keep somebody if they haven’t been playing, and I’ve said before that Adam is a really good player.

“I’ve always liked him, but he’s been really unlucky. He’s had one or two people in front of him. He needs to be playing more football, so we’ll talk to him and see what he’s thinking.”

“I’m looking for new players to bring in as well,” he confirmed. “I know I need to bring a striker in, and I’ve identified a player I want.

“I’ll probably make him an offer this weekend and we’ll see where that goes. He’s a player who wants to come here, so that’s a plus.”

On the absence of midfielder Mike Jones from the match day 18, he explained: “He had an illness. There’s a few of them who have felt that – Jamie Devitt and Tom Parkes were both sick at half time – and that’s why Dev came off in the end.

“It’s something we just have to be careful with. We’ll keep the lads away from each other, but we’ll make sure they’re ready for Tuesday.”

And his final word was on links with the vacant Chesterfield, particularly as the odds shortened with his name at the top of the pile.

“Nobody has called me, nobody has come to me, my agent has rang me, so it isn’t a problem.”