United boss John Sheridan gave us his reaction to the thrilling festive 3-2 away victory at Crawley shortly after full time on Saturday afternoon. 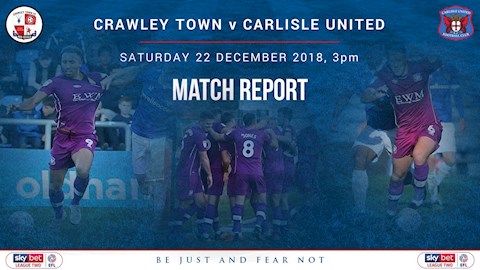 MATCH REPORT: The long trip south for the Blues

“It was an outstanding performance last week and we came into this game feeling confident off the back of that,” he said. “Crawley are a good footballing side, so it was important to come and do things properly and try to get the three points.

“Sometimes it isn’t all about the performance, but I thought we looked really good in patches. We’ve scored another three goals so it’s a good effort from the players.

“As I’ve said all along, we’ve created excellent chances in every game so far this season even though we hadn’t scored in five at home. All you can do is bear with it and try to be patient, even though you do get frustrated, and we’ve had the reward for doing that in the last couple of games.”

“There was also a bit of character shown with us conceding goals at bad times,” he added. “We had to come back from that and that’s where demanding more from each other comes into it.

“If you’re going to achieve at any level you need that in your squad. You need to be asking more and more from each other because nobody is ever going to make it easy for you.

“I’m trying to be as quiet as I can to encourage more of it from the layers. I’ve told the players that if they demand from each other and believe that they’ve got a chance of winning games they’ll be ok.

“If we want to stay in mid-table we can all do that just by winning one then losing two all the time. I’ve said before that just isn’t for me. If you want something more there’s a great opportunity for us to go out and get it.

“I am trying to be calmer in my approach and my half time team talk was me telling them that I wanted them to do the talking and I wanted them to sort each other out. That’s because I want us to try to get somewhere. The important thing for me is that the players want to do that as well.

“In terms of the game I wanted all of them to think about how Crawley were giving us problems and how we could affect the game. To be fair the lads did more talking than they usually do at half time, I kept quiet, because other than their two goals I felt it was our game to go at.”

On going behind so early in the game, he said: “They had some good possession and stopping the ball from going into the box was what we needed to do.

“To be honest, I was disappointed with the way we started the game. We were very poor in the first 10 minutes. The first goal was sloppy, and I think Anthony Gerrard will hold his hands up, he should have done better there. He doesn’t make many mistakes, so he won’t be happy with it.

“We managed to get ourselves back in it when Jerry Yates reacted really well for our first goal. I’m pleased for him because he works his socks off. He’s fighting a cause for the team and he deserves his goals, and it’s nice to see him getting a few striker’s goals as well.

“When Danny [Grainger] stepped up for the penalty there was no doubt in my mind. He backs himself and I don’t think many keepers would have got anywhere near a shot like that.”

With everything to play for in the second half it was United who dominated possession from the moment it kicked off.

“I felt the game was there if we wanted it,” he agreed. “It’s always very pleasing when you end up winning a game and, as we’ve seen, we create opportunities in games so we’ve always got a good chance of scoring goals.

“I hate conceding, but if you analyse every goal you find things you think you should have done better. Their equaliser is an example of where we should stop the cross, it came in far too cheaply.

“We got a reaction after the break and there was good character from our players, because they were always going to come at us through the last 10 minutes. For the most part in the second half we controlled the game and even when we were 3-2 up we were looking to score a fourth.

“In the end we didn’t need it, and it doesn’t matter where you go away from home, if you get the win it lifts everybody.”

With the third goal being the pick of the crop, he commented: “It was a great finish from Jack Sowerby. We moved the ball quickly and it was probably something like four touches and it was in the back of the net.

“That’s what we’ve been doing without scoring in games where we probably could have got more points. From there we fought for what we had, and I’m pleased for the fans as much as anything else.

“The support from them was magnificent. They’ve come a long way, but the trip back won’t feel as bad because they’re going home with three points. I’m chuffed to bits for them.

“There was even more of them here than I thought there would be so it was an outstanding effort from them. The important thing is that they get safely home and it’s great that we got the result for them. The journey back won’t bother them now because they’ll be feeling ready to enjoy their Christmas.”

And on the absence of Macaulay Gillesphey from the matchday squad, he said: “He has an injury with his knee, but it’s an injury he can still play with.

“It probably requires surgery but the feedback we’ve had is that he can manage it. Macca is his own person and if he feels as though he needs an operation now, he’ll have to consider it.

“He’s seen a surgeon, so we’ll have to see what’s best for him and we’ll take it from there. It’s possibly not one he can nurse through to the end of the season, but he could be available to the end of January, I don’t know.

“I’ll leave that with Dolly because he’s better placed to make those decisions.”