United boss John Sheridan gave us his reaction to the convincing home win over Colchester shortly after full time on Saturday evening. 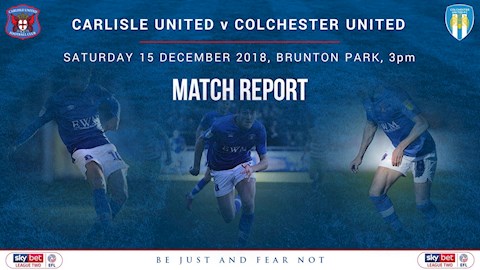 “It was a very good performance against a team that’s going really well,” he said. “I find that it’s typical of us, because we have this kind of thing in us, but it’s an occasion where we were clinical and that really does make a difference.

“We got the goals at the right time, and they were really good goals as well. How many times have I said that if you score first at this level you’ve got a very good chance to go on and win? That’s exactly what we did.”

“The best thing about the day is that our overall performance against a team that’s in form was excellent,” he continued. “As I’ve said, we know we’ve got performances like this in us, and I’m just pleased we’ve done it at home.

“It’s brilliant for the supporters because they’ve stuck by us from the moment I got here. Our home record is nowhere near good enough, but nobody really moans at us about it. The results here at home just aren’t what I want, but I do know deep down that we’re a decent team on our day.”

Speaking more about the quality of the goals on show, he told us: “The goals from open play were good goals, they weren’t lucky in any way, and that’s always pleasing for a manager. They came from excellent football and patient approach play, and we finished the moves off, which is the important part.

“And, I have to say, Danny Grainger’s free kick wasn’t bad either. That capped off a good day and a very good performance. It was all sparked off when Hallam [Hope] got the first.

“It’s a great ball from Gary Liddle and a nice touch from Jerry Yates. Naders hits it, I don’t know if that was going in, and ‘H’ is between the posts and he puts it away. If he’s stood out on the left wing admiring it all he doesn’t score the goal, it’s as simple as that.

“I told Hallam that he should have scored against MK Dons from a similar situation, because he should be getting on the scoresheet a lot more. All three of those strikers who were out on the pitch should be hitting the net more. This was a game where they all played their part and I’m pleased for them.”

“I went with an attack minded side because I wanted three strikers,” he explained. “Behind that I wanted Devitt and Sowerby getting forward and supporting them.

“With Hope, Yates through the middle, and Nadesan I’ve really got three centre forwards out there all looking to get into the box. I threw Jerry down the middle because I know he’s happy there. He gives us everything in every game, out wide or wherever he is, and he’ll have a battle for you.

“I wanted them all thinking they were going to score goals and it turned out alright for us. They worked hard individually and together and it allowed us to get forward a lot.

“They’re three great lads and they work extremely hard for the team. They’ll always give me effort and work ethic, but strikers do get judged on goals. That’s why I’ll keep demanding more from all of them.

“In midfield I thought Kelvin Etuhu did really well. He sat in the middle of the park and did his thing. I know I’ve been playing Jack Sowerby out of position when I put him at right back, and I do like him as a midfield player.

“He’s good at running with the ball and he has good awareness about him. He’s also got goals in him and that’s one of the reason I brought him up here for. Having bodies available meant I was able to play him in midfield.”

The quality of the build-up play was possibly the most eye-catching aspect of the day, and the manager agreed that the confident edge shown by his team had been a particularly pleasing element to come from the 90 minutes.

“The conditions were difficult but the rain made the pitch nice and zippy for us,” he said. “The players put out some really good individual performances as well.

“Everyone played a part, and Adam [Collin] made a great save when it was still at 0-0. Sometimes you just need that little bit of fortune to go with it, but overall we dominated the game.

“There was a bit of nous about what we did, and I like that. There was a bit of cockiness, but only as football players, and that came because we were playing well. If we can keep that standard up we’ll be winning a lot more games than we lose.

“We looked really lively on the break and we took care of the ball when we had it. Some very good goals came from us using it well. Like I’ve said, the fans have been so patient, and they want everything the same as we do. That’s why I want us all to stick together, because it will come.

“Results like this show people that we’re capable of being a very good side. It’s about being relaxed on the ball more than anything. It was a really cold day but the supporters enjoyed themselves.

“I think they know the team is capable of playing like that as well, but we just haven’t shown it enough up here. Everyone knows we haven’t scored enough goals at home, so this is a great result for us.

“I can only applaud the lads after watching them do what they did today. The formation gave Colchester a lot of problems and the players implemented it perfectly. What we’ve shown in this game is what I want to see from my team. I want us to look cocky because we’re playing well.

“I also want us to concentrate. At 4-0 I was telling everybody that I didn’t want Colchester to score. I shouted at Hallam when he gave the ball away, because it’s about keeping your standards up.”

On the Macaulay Gillesphey substitution at half time, he told us: “He had a little knock on his knee. Hopefully it’s one of those where he just needs a bit of treatment and rest.

“He’s played a lot of games and he’s trained every day, so I’m hoping he’ll be right fairly quickly.

“George Glendon has had a knee injury and he only trained on Friday. He came through that feeling fine, so he’ll be available next week.

“Gary Miller has trained but I wasn’t able to put him on the bench. I can only put seven on there, so you have to look at what you think you might need during the game.”