United boss John Sheridan admitted to being frustrated despite the emphatic nature of the victory on Wednesday afternoon as he insisted again that he will continue to demand more from his players as he looks to continue to climb up the table as we head into the second half of the campaign.

“Oldham are a good footballing side and I knew they would cause us one or two problems,” he added. “I was actually unhappy at 2-0, because we possibly shouldn’t have been 2-0 up. Oldham were coming back into the game, we were giving silly free kicks away and we weren’t organising.

“Having said that, I want us to consistently be a good team, so to win 6-0 and keep a clean sheet, you can’t ask for much more. Ten goals and two clean sheets in two home games is what I’ve been asking for, and I’ll keep asking for that.

“It’s about wanting to achieve something. I don’t want people who will be happy to finish 13th or 14th in the league. I don’t want players being happy or thinking like that, I want them to want to get out of the division.”

Speaking very candidly about what he wants from the squad, he added: “If there are any players who don’t want to play for me and don’t like me being demanding, they can come and knock on my door and ask to leave, and I’ll help them get away.

“I’m very demanding and I’ve been successful managing like this, so that’s why I do it. I’m not going to start judging myself in the way I manage. I’m not going to have people looking at me as if I don’t know how to manage. I’ll carry on doing what I’m doing and if people don’t like it, I’ll leave.”

“I’m a demanding manager and I want players to demand from each other,” he continued. “I give them a lot of leeway and they get a lot of perks on the other side, but they need to respect where I’m coming from.

“If they don’t, and I’m getting sick and tired of saying it, they can go, or I’ll go. I’ve not said this in the dressing room, I’m saying it to you because I know you’ll tell people.

“I could see us buckling at 2-0, and that’s why I am the way I am. I felt that Oldham were going to get back in the game if we carried on doing what we were doing and if we didn’t get a grip of it.

“That’s probably what’s happened in the last two or three years at this club, but it isn’t going to happen with me. I will still shout when we’re 3-0 or 4-0 up if I can see that we’re doing things wrong. If we aren’t doing things properly I’ll shout and demand that we do better. It’s just the way I am and, if you don’t like it, tough.” 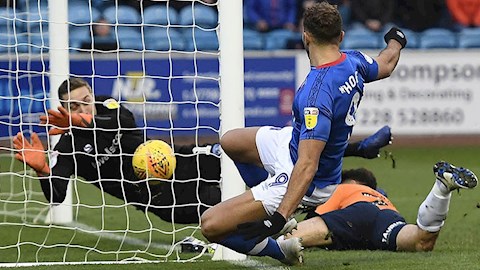 GALLERY: The action from the thumping Boxing Day victory

Explaining more about the root cause of his frustration, he said: “One or two players don’t respond when I say things, or they think they’re getting moaned at or shouted at.

“They need to grow up and get on with it. I’ve managed captains that have played in the Premier League and I’ve been on their case, but they don’t turn around and look at you as if they don’t know what you’re on about. There’s a couple who I’m getting sick and tired of, to tell you the truth.

“I’m not going to go on too much, I shouldn’t have even come and talked to you, I should have got Tommy [Wright] to come in. I’m not having a go at you lads, I just don’t want to start judging myself and people thinking I’m this, that or the other. I’m not having it.

“95% of players who have played under me have really enjoyed it. You’ll always get one or two who are uncomfortable with you, that’s just part and parcel. If you’re going to play for me while I’m the manager I’m going to demand from you.

“If you don’t like it, knock on my door and I’ll get rid of you. Otherwise, if I see it going on too much, I’ll go. That’s something I’d do, 100%, because if I just let it continue it would mean I wasn’t doing my job. If people don’t like how I manage, I’ll walk.”

“I don’t want players thinking that mid table is fine,” he concluded. “I’ve said before, I’ll still shout at players when we’re three or four goals up if I see something wrong.

“If they don’t understand where I’m coming from, and they can’t take it, or it’s too uncomfortable for them, they need to tell me and I’ll let them go. My players get a lot of luxuries here, so if they can’t take me shouting a bit on a Saturday afternoon, they can move on for me. If there’s too many who can’t take it, I’ll move.

“I won’t go on and on, but it can’t last. I’m not getting into arguments with players, but they have to understand where I’m coming from.”

Speaking about the fantastic result, he commented: “We’re playing some very good football. The front three are always lively, we’ve got players who can score goals and we’re getting goals into our performances at the moment.

“We’re being clinical, and we’ve played better than we have today and lost. We were very lively up front and when we move the ball quickly we look good. I didn’t want Oldham to be able to get set up and get in to two banks of four, I told the players we needed to try and get at them quickly.

“We’ve scored some excellent goals, and I like different players scoring goals. Jerry [Yates] was excellent again but I thought the front three were very good. It was a team performance, although Adam [Collin] didn’t have much to do other than deal with a couple of crosses.

“Chances wise I don’t think Oldham have had too much, but they’re a good footballing side. They’ve scored a lot of goals this season themselves so to keep a clean sheet was good from us.

“We’re a good team when we play one and two touch football and move the ball quickly. It’s a good part of our game, and we’ve shown that today. We’re lethal on the break and we’ve got a lot of pace.

“The front three are all centre forwards so they’re naturally thinking about goals. Hallam [Hope] and Ash [Nadesan] do brilliant work defensively for the team as well as in attack. They get in good positions to help the full backs behind them and work their socks off.”