We are delighted to announce that Carlisle United striker Shaun Miller is the Sky Bet League Two Goal of the Month winner for September, receiving 50% of the public vote.

It was poetry in motion as Miller turned a hopeful punt forward into a goal to savour. The key was his volleyed control which gave him the time to judge his hooked overhead exquisitely.

Lead Sky Bet EFL Goal of the Month judge and Sky Sports Pundit Don Goodman said: “When trying to find a late equaliser in games, the ball is booted downfield and goals are often scrappy or a result of bad defending, but that’s far from the case here.

"The initial touch from Miller to set himself is superb and gives him the chance to hook it into the top corner while still facing away from goal. It’s a goal of a lifetime and one that will live long in the memory.”

Miller said: “This is the first time I’ve ever been nominated for an individual award, so it’s very much appreciated.

“We were pushing for an equaliser and penning them back for large periods of time. It was a long goal kick and I managed to get in front of my defender, and when the first touch popped up there wasn’t anything else in my mind other than to bicycle kick it.

"When I glanced over my shoulder and saw it fly into the net it was a great feeling.”

Handing over the award to his forward on Thursday afternoon, manager Keith Curle said: "We know the ability Shaun has and that goal was an example of what he has in his locker.

"It has deservedly picked up the award and it's a reward for the hard work he puts in every day. Hopefully there'll be a few more from him as we go through the season." 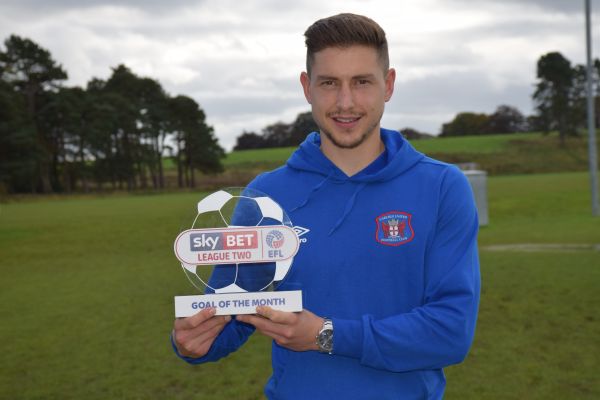