United fan Joe Alecock received a surprise visit from Luke Joyce and John O’Sullivan at Jigsaw Hospice on Thursday evening when the pair popped along to say hello ahead of Saturday’s Emirates FA Cup first-round tie against Oldham Athletic.

Joe, a season ticket holder, will be sat in the disabled section of The Pioneer Stand as usual come kick off tomorrow and he was delighted to see the midfield duo as they spoke to him about the game, and handed over some signed merchandise as a memento of the visit.

“You could tell that Joe was buzzing that we’d gone along,” Luke said. “It was fascinating to hear him talk about the fact that he plays in goals for his Powerchair Football teams and that he’s just been through a recent transfer from Middlesbrough to Newcastle.

“He also coaches the Carlisle United Powerchair Football team at the Youth Zone on a Friday afternoon and, from what we’re hearing, he can be quite demanding and strict. He very kindly showed us around Jigsaw and we even got a look inside his room, so we can’t thank him enough for the way he looked after us.”

“We visited Jigsaw for the official opening of the sensory room and snug a few weeks ago and we said to the staff at the time that we wanted to visit the children and young adults who are staying there,” John explained. “This is the first chance we’ve had to go back there since then, and we had a really good laugh with Joe. You can tell that he’s a massive United fan and I particularly enjoyed listening to him take the mickey out of Luke for that lucky shot which won Goal of the Season.

“He refused to name his favourite player, so it clearly wasn’t either me of Joycey, so we took a guess at it being the usual suspect, the one we call the Magician [Nicky Adams]. All he said was that we’re all equally as good as each other, so he gets ten out of ten for diplomacy.

“Before we said goodbye he came up with a goal celebration for everybody, if we manage to score at the Warwick Road End. Hopefully the lads will remember to do it for him, and everyone will get to see it.” 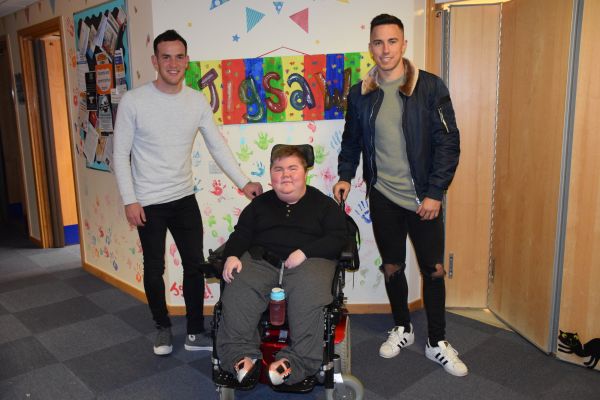 Joe and fellow resident Fraser posed for pictures with the on-duty staff before the lads said goodbye for the evening, and we left the building with a prediction of a 1-0 home victory ... thanks to another Luke Joyce goal!

Our fingers are crossed. Thanks to Joe, Fraser and Jigsaw for inviting us along to their magnificent home.