Manager Keith Curle spoke more about the big shoes left to fill as keeper coach Simon Tracey moves on from the club for personal reasons.

“First and foremost, I have to thank Simon for his professionalism, dedication, diligence and commitment,” he said. “He’s been an excellent servant to this club. As a member of my first team coaching staff he’s been nothing short of superb. He has a fantastic work ethic and a good understanding of how I want to work.

“His programme with the goalkeepers has always been meticulous and well structured, and I know that every keeper we’ve had has taken a lot away from having worked with him.”

“He was a person I knew about before I brought him to the club, and that’s why I looked to recruit him from the position he had with the FA,” he continued. “It was clear to me that he’d built on the knowledge of football he had by working within his role with them, and that level of coaching ability was exactly what I needed to add to the staff I already had in place.

“Personality wise I knew he would fit in with the way Carlisle United do things because of the professional outlook he embodies. The biggest compliment I can give, within the way we worked here, is that he was prepared to voice his opinion. That’s the kind of person I need to work with.

“We can all have it easier by bringing people in who will say yes to everything you say, but that isn’t what Simon is about. I need staff who are going to ask questions and who are going to raise their thoughts in a constructive manner.

“He brings that to the table and he does it in a way which allows everyone to contribute and to find the best way forward. That’s invaluable in an industry like this where the decisions you make are vital.”

“Let me tell you, as a group of staff we’ve disagreed on a number of occasions, be that over tactics, personnel, formations or what we’re having for tea that night,” he explained. “We enjoy that type of atmosphere because it means we’re getting the best out of each other.

“There are strong and valued opinions within the group and also the strength of personality to air them. From there, once everyone has had their say, they go out and make whatever decision I’ve made work. That’s exactly how it should be."

“We informed the players that Simon was leaving us after the game on Saturday," he confirmed. "We did it that way because we didn’t want to disrupt the match build-up and, you have to say, that was a fantastic way for us to say farewell to him. Four goals and a clean sheet – it just couldn’t have been scripted any better.

“I’d known that he was leaving for about a week, so I took the opportunity to write a 13-verse poem for him which captured some of his main personality traits – mostly that he can literally fall asleep anywhere and at any time!

"We gave him that in the dressing room in front of the players and it's fair to say that quite a few people had steam from the showers in their eyes. He's a great lad, very well liked, and he will be missed by everybody. 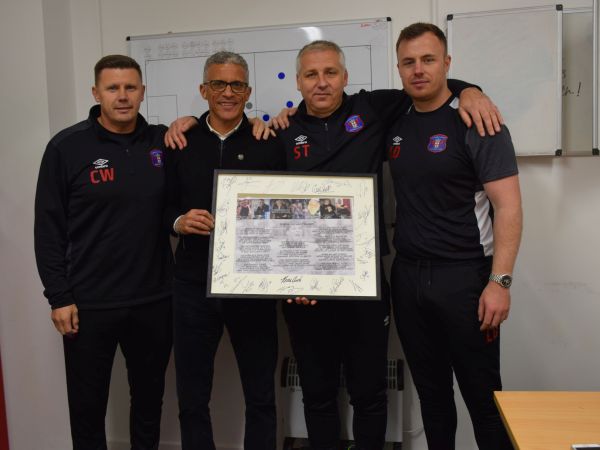 “It’s unfortunate, without going into it in too much detail, that Simon needs to be part of the support mechanism for his family right now. The difficult situation he faces has made it extremely hard for him to remain as committed to his role here as his professional approach tells him he has to be.

“As with any player or member of staff, family well-being comes first as far as I’m concerned. If there are issues away from football to deal with, they have to be at the top of the agenda. Simon needs to be close to home - I’m not going to put my needs before that, and I wouldn’t expect him to either.

“He leaves with the very best wishes of everyone at the club to him and his family.”