Six under 16 players signed up for the under 18 side

We spoke to our Senior Youth Development Phase Coach Chris Blake this week about a successful season which has seen six players from the under-16 side make it through to a two-year scholarship with Darren Edmondson and Dave Wilkes.

“It’s absolutely fantastic,” he said. “We had a discussion at the start of the season about trying to push Cumbrian lads through into the under-18s so it’s excellent to have seen the six lads go through.

“When I was here with Eric [Kinder] we had quite a few lads getting into the first team at one point. We had players like Mark Gillespie, Brad Potts, Dave Symington, Jack Lynch and Alex Salmon, then Kyle Dempsey and Patrick Brough later on. They all got appearances so it’s been very productive in recent years.”

“Of the six players I think four of them came to us when they were eight or nine years old,” he commented. “So many academy coaches have worked with those players during their time with us, so it’s fantastic for all of them.

“The work done at grassroots level feeds through into our academy and our part-time staff put so much into these lads, so to see it come out the other end is really rewarding for all of us.”

Speaking about the players, he said: “Jay Kelly is a right back from Carlisle. We got him from Carlisle City at under-8 level, so he’s been through the whole system. He’s a powerful, quick player who likes to get forward and he’s happy to tackle as well, which is good. We’re hoping to get a lot from him because he’s a strong lad.

“Liam Brockbank is a left back. He’s from Millom so he makes the hour and a half journey up here for every session. He’s very quick and he likes to have the ball at his feet, so we’re trying to develop the longer game with him. He’s a tenacious little player so we’re looking forward to seeing him.

“Cieron Casson is a Workington lad who came from Allerdale Juniors when he was eight or nine. He’s related to Tom Fowler who was the goalkeeper we had with us a couple of years ago. He’s a strong, powerful midfield player who can play in defence, if needed, so he’s quite versatile.

“Josh Dixon is from Crosby. He came through the Community Sports Trust programme so he’s been with us since he was eight as well. He’s one of these new, fashionable number 10s who can play in midfield or up front. He’s skilful on the ball so we just need to make him a little bit tougher for U18 and men’s football.

“Liam McCarron came in from Upperby and Castletown as an under-14 where he was playing on a Saturday and a Sunday. He’s a bright, off the cuff sort of winger who runs at people. He needs to get his head up a little bit more but when something goes for him it really works and he’s hard to defend against.

“Keighran Kerr came in at under-14 level as well, from Harraby Catholic. He’s a dynamic forward player who can play as a central striker. He’s another who will need to get a little bit tougher for this level, but there’s a lot for us to work on. He’s quick and we’ll make him a little bit more aggressive.”

With the contracts already signed, Blak was quick to point out that the lads make the step up with a reminder that the hard work starts now.

“Those lads have all been involved in the U18 team at some point this season already, so that has given them an idea of what is to come,” he said. “Darren [Edmondson] and Dave [Wilkes] have given them an opportunity to challenge themselves at that level, which doesn’t always happen.

“Jay [Kelly] has had a little bit more time with them than the others but it’s been great. They’ve trained with the youth team in school holidays and got to know them. That means they’re a little bit more comfortable in the environment.

“The big thing we’ll be telling them before they join up with the under-18s is to make sure they give it everything. They’ve also got to have confidence and belief in themselves, as well as thinking about how they can fit into 11v11 games next year and at men’s level.

“They’ve got to think about what their role means. They might be a full back who wants to get forward all the time, but they need to think about the needs of the team and the defensive side of things. When you’re a forward player you might be good on the ball, but can you actually get in the box and score goals, or provide opportunities for others.”

“We got 50% of the age group through to the next level this year, which is excellent,” he concluded. “I’m absolutely thrilled and I know all the coaches within the academy feel the same, because they’ve played a part in creating the pathway.

“It’s difficult for the lads we had to release, but we’re thrilled to bits for the lads who got through, and we’re looking forward to seeing how they develop over the next two years.”

JHHI Developments managing director James Mclinden, club partner and long-term sponsor of the United Academy, expressed his delight at seeing such a big crop of local youngsters make it through to the under-18 phase.

“The board and I at JHHI Developments are absolutely delighted to see six young Cumbrian lads make the step up to the youth team,” he said. “The reason we sponsor the Academy is to help young talented footballers have the opportunity to progress into the professional game.

“It is my firm belief that the Academy at Carlisle United has a key role to play in the success of the football club. As we have seen many times in the past, home grown talent has been the lifeblood of the club.

“I wish the boys every success in their new challenge - the hard work starts here!”


The EFL have produced a comprehensive document which covers all aspects of Youth Development. 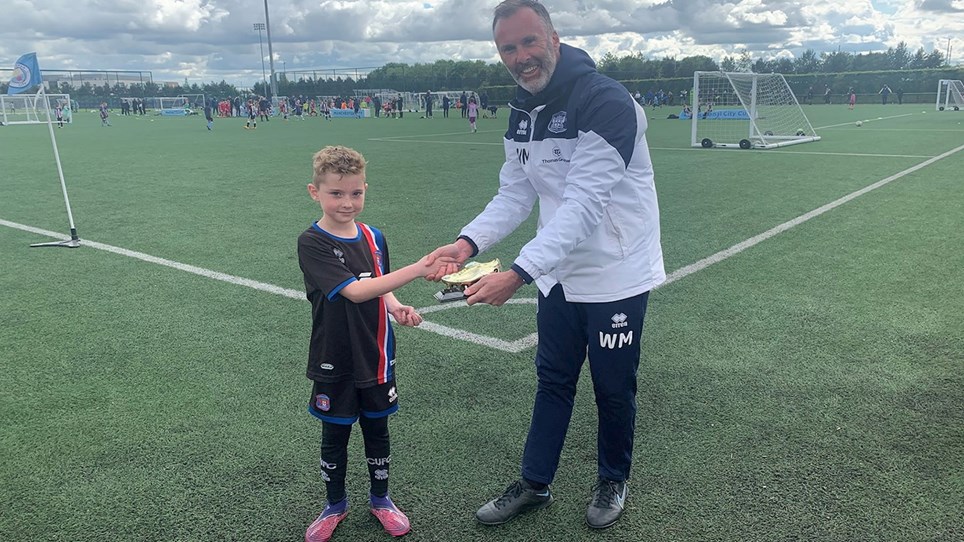