After FA Cup action last weekend, United are back to league business as they make the journey to South Wales to take on Newport County.

The Blues have lost just one of their last nine outings in Sky Bet League Two and will be keen to continue that positive form against the Exiles.

But Newport have been flying high this season and will prove a tough proposition for Keith Curle’s side.

We put Michael Flynn’s men under the spotlight ahead of our visit to Rodney Parade:

After a great escape from relegation last season, Newport have pushed on this season and are currently perched just outside the play-off places in ninth spot following a strong start to the season.

Flynn’s side lost just one of their first seven League Two games this campaign, which set the foundations for their rise up the table.

Their recent form, however, has been slightly less impressive with the Exiles picking up just one win in their last seven league games.

But they did claim an impressive victory over Cambridge United in the FA Cup last weekend, and will be confident of carrying that into the league on Saturday.

Newport had to wait until the end of August to play at their home ground after the pitch at Rodney Parade underwent improvement works.

But since their return to home soil the Exiles have made their South Wales base a fortress, having lost just twice there in league action.

There have been some impressive wins there, too, including a thumping victory over Chesterfield and hard-fought triumphs against Grimsby, Yeovil and Cheltenham.

The two sides had never met in their current form before 2014/15, but have faced-off in every season since.

And it’s Newport who hold the upper hand having claimed victory in five of those meetings, with United only winning one.

That sole United victory came towards the end of last season as goals from Nicky Adams and Jabo Ibehre secured victory for the Blues.

Carlisle have never won at Newport County in their current form, but did claim a victory in Wales during their last meeting with the old Newport side.

That 2-1 triumph in 1988 remains only one of two away Carlisle victories against Newport in either form, with the previous coming back in 1963.

Curle will be hoping his current crop of Cumbrians will be able to turn the tide and pick up a first victory at Newport in 29 years.

+ Mickey Demetriou - A solid defender who is also able to chip in with plenty of goals, Demetriou played a starring role in County’s great escape from relegation last year. He made his break into the Football League with Shrewsbury but found first team opportunities hard to come by, and eventually joined the Exiles in January of this year. From there Demetriou, who is comfortable playing full-back or wing-back, scored three goals and helped keep four clean sheets as Newport avoided relegation - making him a firm fans’ favourite.

+ Joss Labadie - The former Notts County midfielder is currently captain at Rodney Parade, and is in a sparkling run of form having netted twice in the FA Cup triumph over Cambridge last weekend. The box-to-box midfielder joined the Exiles in 2016 and has quickly become a first team regular thanks to displays packed with energy, and plenty of goals and assists too.

+ Padraig Amond - A summer addition from recently-relegated Hartlepool, Amond certainly knows where the goals is and has already netted six for Newport this season. Formerly of Morecambe and Grimsby, the Irishman has plenty of pace to burn and his movement in and around the area makes him a nightmare for defenders to deal with. He’ll need to be watched carefully this Saturday.


United host Everton U21 on Tuesday evening in the second group game of the Papa John's Trophy [kick off 7pm]. 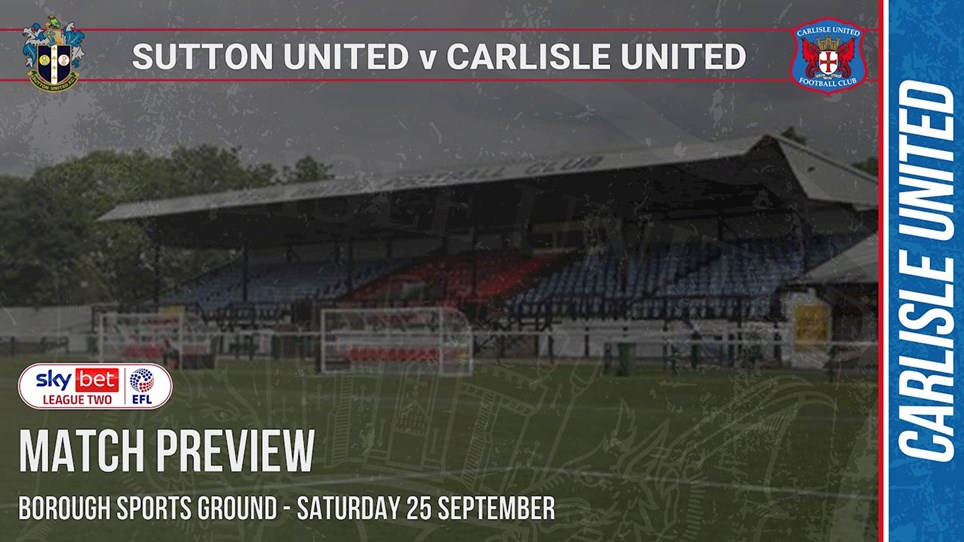 
United and Sutton come together for a first encounter with the Yellows having secured promotion to the ranks of the Football League for the first time in their 123-year history last term.


It's back to Brunton Park on Saturday as the season continues to motor on.

MATCH UPDATE: Everything you need to know ahead of the Saturday home game


The Iron of Scunthorpe are the visitors to Brunton Park this weekend.


United and Sutton come together for a first encounter with the Yellows having secured promotion to the ranks of the Football League for the first time in their 123-year history last term.


It's back to Brunton Park on Saturday as the season continues to motor on.

MATCH UPDATE: Everything you need to know ahead of the Saturday home game


The Iron of Scunthorpe are the visitors to Brunton Park this weekend.

PREVIEW: Longest trip of the season


In a season of long trips this one is a whopper, with the Blues heading south and then south again as they make their way to Crawley at the weekend.