Carlisle left it late but their character came through as they worked hard to overcome some frustrating passages of play, and their reward was a late, late winner deep into time added on.

United were undone with just 39 seconds on the clock when a huge ball forward bounced awkwardly after possession had been robbed from United deep inside the visiting half. It was left to bounce again and hesitation between Brisley and Gillespie allowed Reuben Reid to nip in and prod it into the back of the net.

Carlisle were almost back on terms immediately when Adams sent a cross to the back stick. Brisley nodded it down for Kennedy to shoot but his blocked shot was accompanied by the referee's whistle for a push inside the area.

There was urgency in the Cumbrian play and they levelled things up with nine minutes on the clock when Grainger crossed early from the left flank. It spun high into the air, off an Exeter boot, but Charlie Wyke kept his eye on it and his reward for his concentration was goal number seven for the season with a decisive close range header.

United started to probe and some slick passing through the middle left Joyce with options. He fed it to Jones and his lobbed pass had Ibehre interested until Pym raced off his line.

The Grecians showed again with a run from the half way from Moore-Taylor, as the game stuttered along, and Gillespie had to take care as a thumped effort skipped off the surface. The visitors were in again moments later when an exchange of passes left Oakley with space to cross. Brisley did well to get back and stop it as it headed for the danger area.

Quick thinking from Grainger released Adams as Exeter took time to set themselves for a throw and an angled cross brought Wyke into the area at the sprint. He was an inch away from getting a touch and the ball was eventually grasped by Pym.

The visitors picked a way through the Cumbrian back line midway through the half with good touches from Croll, Oakley and Reid, and a toe poke into the box invited Sweeney to shot. It was on target but brave defending from Grainger protected the target.

Gillespie had to dive low to save a 23-yard free kick from Holmes which threatened to creep in and United went close at the other end when Ibehre shielded a Grainger pass before bringing Adams into play. His cross found Joyce but he couldn't keep his header down and it sailed over the bar.

Carlisle went close again when another deep cross from Grainger was won by Raynes. Brisley had a go, as did Kennedy, but two strong tackles made it difficult for anyone to get a clinical touch. Wyke had his back to goal and his attempted scissor kick went well wide.

The Cumbrians were a whisker away from taking the lead on the stroke of half time when a half clearance from a Grainger corner fell to Jones. His technique was superb as he unleashed a beauty of a volley but he was disappointed to see it whisk just past the angle of post and bar.

Carlisle struggled to get going after the break and they were punished again when Reid pulled wide and ghosted past his man. His cross was missed by three blue shirts and Lee Holmes was left with the simple task of slotting it into the waiting net.

Another long range effort from Jones had to be dealt with by Pym as it came through bodies, and much needed impetus was added to the Carlisle repertoire as Lambe and Devitt were thrown into the fray. Crosses from the left and right flank came in following the changes but Exeter battled on to keep Carlisle at arm's length.

Gillespie had to save from a McAlinden flick as Exeter made use of some loose Carlisle possession and the same man forced a fingertip save from the United stopper as he curled a low shot from distance.

A long range Devitt effort was deflected over the bar, but the best bit of Carlisle play of the day earned them an equaliser as a lovely touch from Adams took him past his defender. He crossed on the run and Shaun Miller guided a beauty of a header into the bottom corner past the stranded and frustrated Christy Pym.

And United grabbed the dramatic win deep into time added on when a lovely ball into the box fell nicely for Wyke. He made no mistake with a rasping finish. 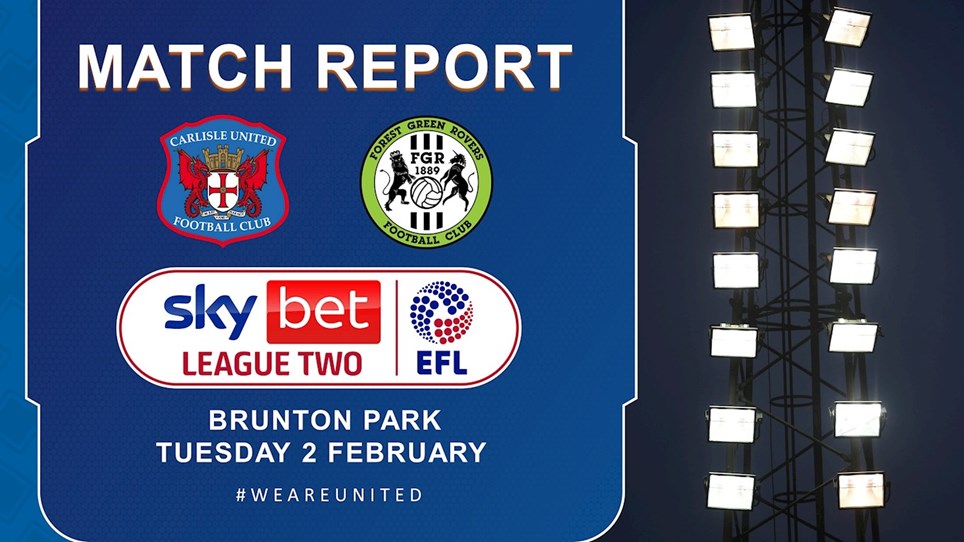