Crewe grabbed back-to-back wins with a hard fought victory on New Year's day as United paid the price for a slow start by leaving themselves with a mountain to climb.
The Alex were on the attack within seconds of kick off when a midfield tussle left Osman with space to cross on the right. He whipped it toward the penalty spot and Aneke could only guide his header right at Amos.
United responded with a good move through the middle of the park and Amoo picked a ball to the far post when he spotted Noble in space. His attempt at a volleyed cross had Garratt scrambling to pick it up before it crossed the line.
The home side looked dangerous going forward and Hitchcock combined with Bangna to make space for another delivery. Aneke made his move but he had to stretch for the header and he couldn't keep it down.
United had a good spell of possession without putting the home goal under too much pressure but makeshift centre half Paul Thirlwell had to be at his best to prevent what looked a certain goal. Slick Crewe passing opened the Cumbrians up and a cut back from Inman had Aneke and Hitchcock interested until the captain lunged in to hook the ball clear.
Home tails were up and Aneke was ready to celebrate when he looped another dangerous cross back towards the near post. Amos recovered well to get enough of a touch to send it onto the bar. Thirlwell was on hand once again to hook the loose ball to safety.
Mesca Bangna saw plenty of the early ball and he broke clear to cross from the corner flag as United stayed deep. Matt Tootle arrived late and he thumped the loose ball through the bodies and it needed a diving save from Amos to cover the bottom corner.
More timely defending from Paul Thirlwell prevented Aneke from finishing off another incisive move when Inman beat two on the left. The interception from the defender was to be his last action of the game as he pulled up to be replaced by Courtney Meppen-Walter.
Tom Lawrence broke clear as he rode a challenge in midfield and he spotted Miller in space as he arrived from deep. The big striker set himself to shoot and was disappointed as it curled away from the target.
Carlisle stayed forward and Amoo beat his man to give Buaben a brief moment of hope. He rose well to head it but Garratt had moved across to pluck it comfortably out of the air.
United had to concentrate as their hosts finished the half on top and Tootle did well when he shrugged off two challenges to put the ball in the mix. Ehmer and Meppen-Walter blocked as the back line stood strong.
But the Alex should have taken the lead on the stroke of half time when Inman put his head down and ran at Chimbonda. He went past his man but was disappointed to poke his shot from the angle wide as he went one on one with the keeper.
Carlisle were quick out of the blocks at the start of the second half and David Amoo showed skill when he turned Tootle inside out on the edge of the box. He opened himself up and produced a beautiful curling shot which somehow ricocheted away to safety off the inside of the post.
It was the home side who were celebrating though when they worked hard to get a cross in from the left. A one-touch lay off left Chuks Aneke with a brief opening and he took his chance with a sweet finish from the outside of his right boot.
Crewe should have doubled their lead as they attacked in numbers with Inman in acres of space. He had Hitchcock and Aneke to aim for but he lost his composure and wasted the chance. A hurried clearance brought a corner and the Carlisle defence fell into disarray as they failed to clear their area. Harry Davis was last to chance his arm with a powerful shot which only just went wide.
It was a mountain to climb for United on 62 minutes when Inman carried the ball into the box, beat Chimbonda and then drilled his cross across the face of goal. Amos got a touch but Bangna was there to rifle his volley into the roof of the net.
Liam Noble tried to raise spirits when he swept his boot through a pass from Morris, but Crewe looked confident as they used their wide men to cause the problems. Tootle had a shot on the run which went just wide and Grant thumped one at Amos when he was encouraged to try from distance by an increasingly vocal home crowd.
Carlisle gave themselves a lifeline with just over ten minutes to play when Tom Lawrence took charge of a deep free kick. His strike flew past the wall and left Garratt to flap at thin air as it found its way into his top corner.
United had a spring in their step and they went close again when Chimbonda rose highest to meet a Berrett corner. His header had power but it was always going wide. And Crewe survived a late scramble when a Carlisle corner left Garratt in no man's land. Three defenders on the line combined to clear it to safety as the visiting strike force wheeled away in frustration.
+++++++
Goals
Crewe - Aneke (52), Bangna (63)
United - Lawrence (77)
+++++++
Bookings
Crewe - Davis (76)
United - Lawrence (87)
+++++++
Teams
Crewe Alexandra - Garratt, Tootle, Mellor, Davis, Ellis, Osman, Inman, Hitchcock (Oliver 85), Aneke (Guthrie 90), Bangna (Moore 87), Grant. Subs - Martin, Leitch-Smith, Ray, Nolan.
Carlisle United - Amos, Chimbonda, Thirlwell (Meppen-Walter 34), Ehmer, Robson, Buaben (Morris 65), Noble, Berrett, Amoo, Miller (Guy 58), Lawrence. Subs - Fleming, Potts, Beck, Symington.
+++++++
Referee - Mr Darren Drysdale
Attendance - 4,458 (401 away fans)


It was one of the longest trips of the season for the Blue Army on Saturday afternoon as they headed round the M25 to windswept Crawley.


United were back in home league action on Tuesday night as they faced Cheltenham Town at Brunton Park.


Carlisle welcomed table-topping Swindon Town to Brunton Park on Saturday afternoon as they returned to home soil for their latest league fixture. 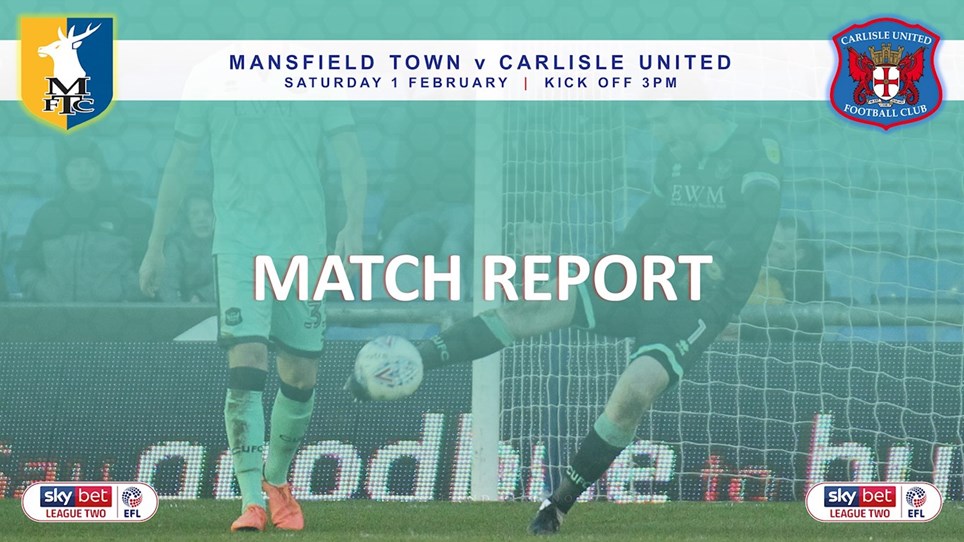 
Carlisle and Mansfield headed into the second month of the new year looking for more points to help them to climb the table as the games continue to come thick and fast.