Magpies next up at Brunton Park

Carlisle United go into this game looking for a third consecutive victory following a fantastic fortnight on the pitch with a convincing win over Stevenage coming off the back of a determined first home success of the season over Sheffield United.
Defender Reece James returned to Manchester United this week but good news came when Hull City left back Conor Townsend agreed an extension to his current loan deal which keeps him at the club until the end of November.
Click HERE to watch a clip from our Conor Townsend interview on YouTube.
Meanwhile discussions continue with Swindon Town over the immediate future for Troy Archibald-Henville as his one month stay at the club expires at midnight on Saturday.
"Troy knows that we're talking to Swindon and that we would like him to stay," caretaker manager Graham Kavanagh explained. "Those talks are ongoing at the moment and we'll see what that brings.
"The lads are under no illusions that this will be a difficult game. Notts County are a good side who have got off to a poor start and they will want to put that right. We're going to have to play in the same way as we have in the last two games because we'll be punished if we take our foot off the gas.
"We've built up a bit of momentum and we want to keep that going now. Hopefully that will be the case."
Chris Chantler rejoins the first team squad for training next week following his long-term lay off - we'll be talking to him next week about what has been a very frustrating summer on a personal level - and striker Lee Miller is a doubt following a knock to his calf last weekend.
Other than that, it's a full squad to choose from for what should be another good game.
++++++
Ticket prices
Click HERE for Brunton Park ticket and stadium information
++++++
Head to Head
+++++++
When last we met
For a look back at one of our previous meetings with the Magpies pick up your copy of our award winning match day programme - Back of the Net!
As well as match action and reports you can enjoy a 60-second quickfire Q&A with Chris Chantler and take part in our free to enter quiz to a win a download of the brand new White Lies album.
Club history, stats, fun pages, regular youth and first team features - it really does have something for everything. Make sure you get your copy of Back of the Net this weekend.
++++++
Odds - Sky Bet
There were five away victories last weekend in Sky Bet League 1, but will the away sides pull off more shocks again this weekend? Read on for Sky Bet's take on Carlisle’s chances this weekend.
Carlisle put in an impressive performance on Saturday as they ran out convincing 3-1 winners away to Stevenage, in a fixture the Cumbrians never looked like losing.
David Amoo grabbed his second goal of the Sky Bet League 1 campaign in the 85th minute. You can back him at an enticing 12/5 to score again this Saturday. Click HERE to back David Amoo.
Carlisle tend to fare well against teams in the bottom six of the Sky Bet League 1 table. They’ve won six of their last nine such matches at home, and are currently excellent value at 7/5 to pick up the three point at Brunton Park this Saturday. Click HERE to place this bet.
Their defence has been rock solid in recent weeks, conceding just three goals in their last five games, including none before half-time. The Cumbrians have also been level in their last five home games against bottom-half teams, and that looks marginally better value than under 2.5 goals. The half-time draw is an attractively priced 11/10. Click HERE to place these bets.
Other reasons to bet:
•Carlisle have been level at half-time in six of their last eight home matches = 11/10.
•Carlisle have had under 2.5 goals in four of their last five games = 5/6
•Nine of Carlisle's last ten home draws have been draw/draw results = 9/2
Remember, if you haven't already got a Sky Bet account, you can get a completely free £10 when you join and Carlisle will also get £10 when you make your first deposit.
Click HERE for more information and, remember, every bet you place helps the club!
Please note – prices subject to change.
++++++
Referee
Our match referee is Mr Eddie Ilderton.
He has been the man in the middle for seven games so far this season, showing 14 yellow cards and two red cards.
A regular at Brunton Park - he was even here for our pre-season meeting with Burnley in July - his last competitive fixture with us was our 2-1 win over Bury at the end of December during last season. Mike Edwards picked up our only yellow on a day when four bookings were made, and early goals from Lee Miller (a penalty) and Matt Robson were enough to get us over the line despite a late strike from former-Blue Steven Schumacher.

MATCH PREVIEW: Local derby for the Blues this weekend


When these sides met at Brunton Park in October, it was the first coming together in the league for some 56 years. 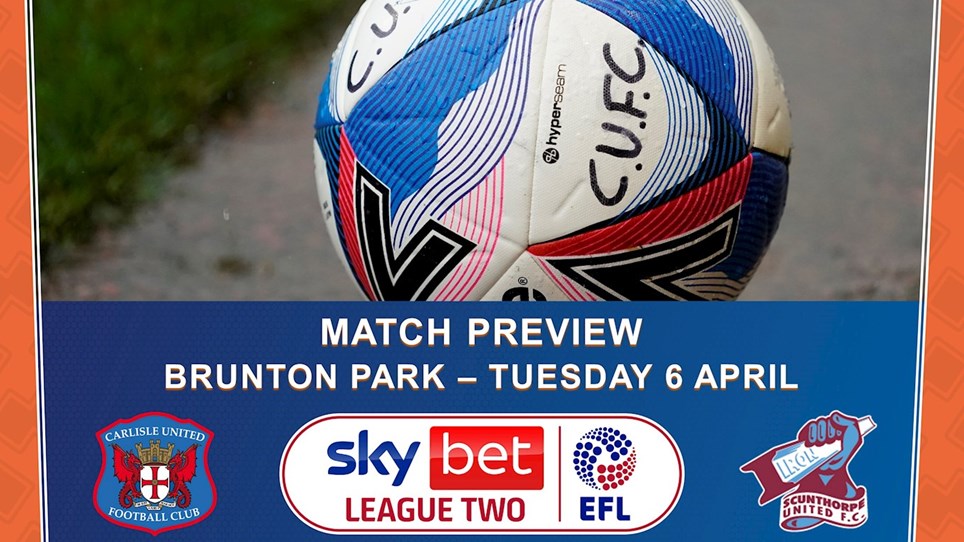 
It's back to Brunton Park for the second of the Easter fixtures as Scunthorpe come to town.