Kinder on the Tuesday draw

Youth boss Eric Kinder gave us his reaction to the 2-2 draw with Fleetwood on Tuesday.
“It was a disappointing day for us in the end, and that was after we made a really good start.
“The pitch was really difficult to play on due to the recent poor weather and it was really heavy in places.
“We coped with it in the early stages and we probably could and should have been two or three up by the time we finally got a goal.
“That came on 18 minutes when Alex Salmon chased a back pass and the keeper smashed it against him. He was left with the easy task of rolling it into the back of the net, but he gets a well done for being alert and for making life hard for the keeper.
“We controlled the rest of the first half and the worrying thing for me was the fact that we couldn’t extend the lead. The chances we had to do that weren’t just good – they were excellent. Alex [Salmon] had two chances that he normally gobbles up, Jamie Clarey had a really good opening and Patrick Brough missed one which just about summed up the way it was going.
“When I got the lads together for the half time team talk the only thing that was on my mind was the fact we should have been out of sight, and we weren’t. As far as I was concerned we’d done a lot of hard work but we’d let them back into it. They grew in confidence with every chance we missed and they had started to create a few of their own.
“I warned the lads that they needed to be tight for 15 minutes, because Fleetwood would be up for it, and it was obvious they were going to come at us. I couldn’t have been more right if I tried because we were 2-1 down within three minutes of the restart.
“The equaliser came straight from the kick off when they got the ball wide. They put it into the box quickly and the centre forward was completely unmarked. He had the fairly easy job of picking his spot.
“They sent another cross in from the right hand side in their next attack and the only person who didn’t think the player was offside was the linesman. That’s no excuse though because he was unmarked again, at the back post, and he put them ahead.
“So, we’ve gone from being in the driving seat to fighting for a point within the space of two attacks. We played some decent football after that but we continued to miss our chances and we were caught on the break a couple of times. They could actually have finished us off so, in that sense, we were lucky.
“We kept plugging away and Patrick Brough got the equaliser for us with five minutes left to go when he got away from his man. We had a couple of half chances to nick it but it overall we were left looking at a point from a game we should have won easily.
“The flow of the game wasn’t helped by a very fussy referee who booked eight players in total. That made it an even more frustrating afternoon, but it’s one we need to put behind us.
“I’ve found with this group that they can get a little bit arrogant and ahead of themselves. In this game they expected to push on and get a second but they have to realise that it doesn’t come easily. We’ve missed chances that were too good not to take and we were almost punished in a big way.
“It’s all about being strong mentally and physically and that’s something we can lack. When things are going our way we look like bullies. When it’s a bit tougher we go into a shell – I think I’ve just described the trait of a bully there to be honest.
“I think we can stop talking about the title now. We’re too far behind and we’ve dropped too many silly points. Of the games we’ve lost we only really deserved to lose the one at Blackpool, where we were completely outplayed. The score line was 3-2 to them but that really flattered us. The other games we’ve drawn and lost have been our own fault.”
United – Parker, Thomson, Chisholm, Morse, Minor, Lynch, Berwick (Gwinnutt 56), Dempsey, Brough, Clarey (Dixon 69), Salmon. Subs – Brass, McEvoy.
Looking ahead to the Youth Alliance Cup meeting on Saturday, he said: “They’ll come up here for the semi-final thinking they have a great chance.
“We have to be much better than we were on Tuesday or we’ll have a problem. I spoke to their coaching staff and they told me that was the best Fleetwood have played this season, so it’s a bit of a warning for us.
“They’ve come and had a go at us, as teams seem to like to do, and we have to start dealing with it.
“In terms of what happens on Saturday, it can work both ways. It could be that our confidence is knocked and they come here thinking it’s a game they can win. I’d certainly be thinking that if I was part of their set-up.
“Or it could be that the lads give themselves a shake and they go out and do it properly. We’ll just have to wait and see.”
Carlisle United v Fleetwood Town, Youth Alliance Cup semi final, Saturday 16 February, Creighton Rugby Club football pitch, kick off 11am


With it looking unlikely that we’ll see a return of fans to Brunton Park until the beginning of next season (and even that has yet to be confirmed) football clubs the length and breadth of the country...


As we all look forward to the lifting of lockdown measures, the club are pleased to announce that the Blues Store will reopen for online and telephone orders from Monday 1 March 2021. 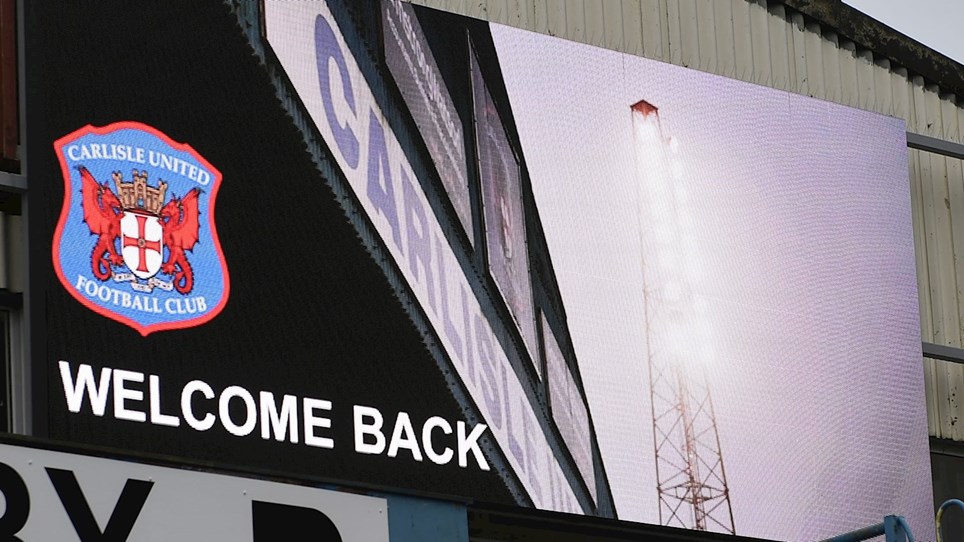 CHIEF EXECUTIVE: All along we've wanted fans back at the earliest opportunity


The announcement from Prime Minister Boris Johnson on Monday came as no surprise, but it was still a sobering moment when it was confirmed that a return of fans before the end of this season is now...