Today’s goal of the day is more a walk down memory lane, as we feature a game in which the Blues actually failed to find the back of the net. 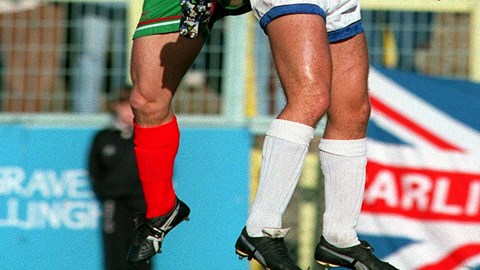 But it remains one of those days those who were around in the late 80’s still talk about fondly,as some of the best players in the country took to the Brunton Park pitch.

Kenny Dalglish, one of Liverpool’s all-time greats, was back at Anfield as manager and he brought his copybook of stars up to Cumbria for their first FA Cup outing of the season.

Carlisle had battled their way past Telford in round one (that needed a replay) and Scarborough (a tense, bad-tempered away win courtesy of an own goal) and their reward was the kind of third-round draw every lower league team dreams about.

Excitement levels were through the roof as soon as the names came out of that, and the home crowd didn’t disappoint with over 18,500 fans packing every spare inch on the terraces come kick off on the big day.

For half an hour the dream was well and truly alive. One chance in particular, a 12-yard volley from Brent Hetherington, brought a huge chorus of oooh’s as it whistled just an inch over the bar.

John Aldridge had already missed what can only be described as an absolute sitter, as United gave as good as they got, but the hosts were undone just past the half hour when John Barnes put a loose ball in the net as Carlisle struggled to clear their lines.

Into the second half and two moments of team quality shone through for the Reds as they worked space for Steve McMahon to bag himself a brace.

The scenes at the final whistle reflected what had been an excellent and hard-working performance from Carlisle, and returning hero Peter Beardsley was left under no illusion as to how the fans felt about him as he found it nearly impossible to make his way off the pitch.

So, no goals for United, but we hope you enjoy the trip back in time anyway.

Liverpool went on to win the competition that season, most definitely a fitting outcome following the tragic events at Hillsborough, and they picked up the League title the following season, the last time they would do so (until this season?) with Kenny Dalglish still the man at the helm.

Get well soon Kenny! The best wishes of everyone at Carlisle United are sent your way.

Watch the highlights from the game here: