United boss John Sheridan took a look ahead to this weekend’s Emirates FA Cup first round meeting with Crewe Alexandra at his Thursday afternoon press conference.

Speaking first about the dramatic home win against Newport County last weekend, he said: “I think everyone agrees it was a massive relief to score the goals and then to win the game in the way we did. We made it a lot harder than what it should have been, but I’d take another four or five wins like that if it means we’re getting three points from every game.

“I’ve watched the video and I actually think we’ve played better than that and lost at home in the games that went before. We scored first, which gave us a platform, and we could have scored another couple to make it even more comfortable with the chances Jerry Yates had.

“We gave away some sloppy goals away, but the massive thing from it was that we got the win. It might just be the little thing we need to pick us up and start us on a run again. It was a great goal that sealed it in the end and I think there’s only Danny Grainger who would take on a shot like that.

“We all know he can hit a ball and the only place he could have got in was in the top corner. He stuck it so well and it was a massive relief for everyone. Things like that are great for the supporters and it was nice for us to do it for them after the disappointment of losing five at home on the trot.” 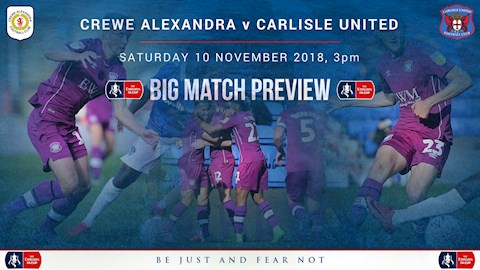 BIG MATCH PREVIEW: A look ahead to this weekend's FA Cup first round game

Looking ahead to the trip to Crewe, he said: “I think we all agree that the FA Cup is a fantastic competition. Everyone knows what it can mean to lower league clubs and financially what it can bring if you’re lucky enough to go on and get a big club in later rounds.

“We know we’re not going to win it, but you could end up playing somewhere where the players may never get the chance to go again. That’s why it’s important that we try to get through. If we can’t win on Saturday we have to make sure we get another chance at it with a replay, because we want to be in the draw for Monday.”

“Crewe will make sure they make it tough for us because they’re a good footballing side,” he commented. “They’re one of the better sides in the division at playing football on their day, but we go with confidence. Our away form has been strong and we have to see it as a winnable game for us.

“Like I say, I know what they can play like and they’ve been a good side who can play decent football for years. If we allow them to dictate things they’ll cause us problems, but we’ll be taking a few fans and we want to play well for them.”

“The good news for us is that we have people who can play who we didn’t think would be available,” he explained. “Jerry Yates, Regan Slater, Jack Sowerby and Adam Campbell have all had permission, so there’s only Ashley Nadesan who can’t feature.

“I expected that to be the case and I completely respect Fleetwood’s decision on that. He’s their player and if he’s doing well, or whatever, you have to accept what the parent club thinks. I’m just happy that we’ve got a few bodies because it looked like we were going to be short at one stage.

“Hallam Hope is fit and back from injury, so he comes back to replace Naders if we want to look at it in that way. We go there with a strong squad and selection problems for all the right reasons. It’s down to me to pick the team that will win us the game and, if we perform to the standard we’re capable of, we’ll give ourselves a good chance.”

“Injury wise Kelvin Etuhu and Tom Parkes are probably ten days to two weeks away,” he explained. “Jason Kennedy will hopefully be training again in two weeks or so, and everyone’s buzzing for the lad. He’s been out a long time and he’s doing ball work now.

“That’s a huge boost for everybody and we’ll just see how it goes with him. He’ll know when he’s ready and we all know we need to be patient. There’s no point rushing now he’s come this far.”

“I was very fortunate to play in an FA Cup final and, looking back, it was a game we should possibly have won, against Arsenal.

“You can’t beat this competition as a player and some of the occasions you can get to experience are brilliant and things you never forget.

“For us, we have to be realistic. We have to think about getting as far as possible and if we make a few quid from it, that will be even better.”