United kick off the second month of the new year at Field Mill as they go up against Mansfield Town.

The month of January has provided a snapshot of how this season has gone for the Stags with four defeats and two victories from their six league fixtures.

That came off the back of a winless December which saw them slip down the table, and the difficult run leaves them currently sat fourth from bottom, but with an eight-point cushion between themselves and bottom spot.

A comfortable 3-0 victory over promotion chasing Bradford last time out at Field Mill was a welcome victory on home soil, but they were brought back down to earth on Tuesday night when they lost 3-1 at Boundary Park against Oldham.

Goals most certainly haven't been a problem with Nicky Maynard weighing in with a more than credible 13 already. The ever-reliable Danny Rose has nine and Andy Cook - a product of the Carlisle United youth system - has notched seven so far this season.

Defensively they have looked to help to plug the leaks with the January additions of former-Plymouth right back Joe Riley and Newcastle United defender Kelland Watts, in from the Magpies on a half-season loan deal.

From the head coach

Speaking ahead of the game, Chris Beech said: "As ever with this division this will be a completely different test for us on Saturday.

"Mansfield have some very good players and they will be unhappy with their league position. We're at a stage of the season where everybody needs points for their own reasons and it's no different for both teams this weekend.

"We know the threats they have because they have strikers and attacking players who can score goals and create good opportunities, but we'll prepare properly and, as always, it comes down to what we do.

"For us, this week has been about recovery and preparation. It's been a tough period but the players have responded well and they've got the rewards for the hard work they've put in.

"I still want more, and it's important that we now add consistency to that hard work. We've made ourselves harder to beat, which is really pleasing, and now we want to continue to add the points to go with these good performances we're seeing."

The last time we met was at the beginning of this season when the Stags came north to Brunton Park. It was a game where United struggled to get going and they were undone early in the game by a deep cross to the back post. Danny Rose arrived late to smash it into the net. The advantage was doubled on the stroke of half time, and that's how it stayed as the visitors went away with a 2-0 victory.

Our match referee this weekend is Jarred Gillett. Mr Gillett has taken charge of 19 games so far this season showing 66 yellow cards and two reds.

A former Australian A League official he made the switch to the English leagues in April 2019 and has spent this season refereeing at Championship level.

This is his first Carlisle United fixture.

The Domesday Book compiled in 1086 has the settlement recorded as Mammesfeld whereas in later market-petition documents of 1227 the spelling had changed to Maunnesfeld. 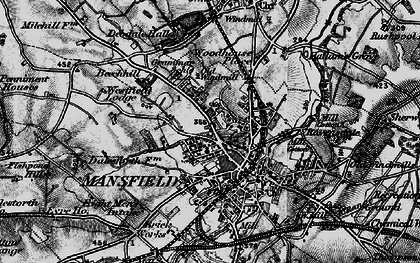 By the time Richard II signed a warrant in November 1377 granting the right for tenants to hold a four-day fair every year, the spelling had changed again to Mannesfeld.

Carlisle and Mansfield headed into the second month of the new year looking for more points to help them to climb the table as the games continue to come thick and fast.

The Cumbrians were in buoyant mood following back-to-back league victories against Walsall and Forest Green and they went to the One Call Stadium with another new face in the ranks, with midfielder Callum Guy added to the fold.

Forward Omari Patrick was also in the dressing room, as was new keeper Marcus Dewhurst, but they hadn't met the match registration deadline so were in on a watching brief.

United had half a sight in the first minute when a long throw from Kayode caught in the wind. A half clearance came to Mike Jones and he hammered a firm strike at the target. Pearce got himself in the way, but he didn't know too much about it.

Hayden needed to defend at the other end when Benning got into the box. His low delivery from the left was looking good for Maynard until the centre back stretched out a leg to hook it away.

The end-to-end feel to the game continued with a Thomas corner which caused all kinds of problems. Hayden and Kayode were at the back stick and Alessandra lurked as it came back into the mix. Charsley jumped in to make a much-needed clearance.

Mansfield caused themselves a moment of panic when Mike Jones charged a long ball forward down at source. It spun towards the home box and Thomas and Alessandra made things uncomfortable for Olejnik as he raced out to claim the ball. He spilled it, but he reacted quickly just as Alessandra looked to take it away from his hands.

Adam Collin was off his line smartly on 15 minutes as Maynard beat the offside trap to go after a through ball from Charsley, but it was United who nearly took the lead when Nathan Thomas was bundled over 30-yards from the target. He dusted himself down and put his boot through the set piece, but Olejnik reacted well to tip it over the bar.

The game stayed tight, but Carlisle had another good set piece opportunity when Alessandra was felled tight by the touchline. Thomas whipped it in, but Olejnik did well to punch it away from danger. The visitors recycled it and Anderton strode forward as he spotted a gap. His drive skipped off the surface and the stopper had to dive low to push it away.

It was Mansfield's turn to try to make the best of a free kick situation on 36 minutes and a good delivery from Benning found Sweeney on the jump. His header had purpose but Collin made easy work of it.

The Kayode long throw came into effect again just before the break when he sent it long from the right hand touchline. It was squeezed out of the box by Sweeney, but Anderton clipped it back towards the penalty spot. Webster challenged but Pearce did enough to guide it over his own bar.

There were loud appeals for a penalty from the corner when Webster won a tussle which earned him the right to nod the ball back towards the six-yard box. It clearly struck Pearce on the hand, but the referee deemed it be accidental and he waved the arguments away.

United continued to look the more likely and Bridge broke clear after combining with Watt in midfield. His cut back went all the way through to Mike Jones but his instinctive rasper was blocked.

The second period took a while to find its feet, with possession conceded by both sides, but Adam Collin had to be alert on 55 minutes when Bishop unleashed a shot from nothing. It was going in until a hand turned it wide. Pearce met the corner but his header looped high and dropped onto the roof of the net.

But Carlisle were undone by a direct piece of play when a huge kick from Olejnik was collected by Rose, who had ghosted beyond the back line. He took a touch before sending Maynard on the overlap, and his drilled effort from the edge of the box left Collin with no chance as it flew towards the bottom corner.

A wonderful piece of skill from Guy took him past his man as the Cumbrians looked for a response and his cross brought a near post challenge from Kayode. Thomas followed up with a second touch, but the Stags closed ranks and Pearce smashed it clear.

Midfielder Elliot Watt sent a ripping free kick into the box which saw both Hayden and Webster throw themselves at it. It needed a touch, but it sped clean through and behind for a goal kick.

The task got harder for United just after the hour when a ricochet on the edge of the box invited Maynard to try his luck. His volley took the slightest of deflections as it made its way towards bulging the net.

A stunning finish from Elliot Watt brought the away fans to life when he dropped a shoulder 20-yards out, after what had been a scrappy period of play. He was at an angle, but Olejnik had no chance from the moment it rose off the midfielder's boot. All the keeper could do was watch in agony as it dipped late and found its way in.

And Carlisle got the point they deserved when a free kick from the right from Watt was stabbed over the line at close range by Kayode, who made it two goals in two games and another thrilling finish for the Blues.

Young adults must provide proof of age when purchasing tickets as well as on the day of the game.

Tickets are available to purchase on the day of the match but there will be a £2.50 increase per age category. There will be cash only sales on match day.

The admission price for disabled supporters (with carer) is based on their relevant age category with a carer free of charge.

In person – come to the main ticket office in the Pioneer Stand at the designated time. Ticket sales on home match days will be from the West Stand ticket office.
Phone – ring the ticket office on 0330 094 5930 at the designated times and pay with a credit / debit card. Calls to this line are charged at 7p per minute from a landline. Mobile charges may vary.
Internet – click HERE and follow the online instructions.
Please note - to post tickets out to customers who have purchased over the telephone there is an additional charge of 75p. The last day tickets will be posted is 5pm on Wednesday 29 January.
+++++++
Bus Travel
For further information on travel, contact the following:
Carlisle United Supporters' Group Away Travel: 07563 700 987.
Click HERE for more information on booking and departure times.