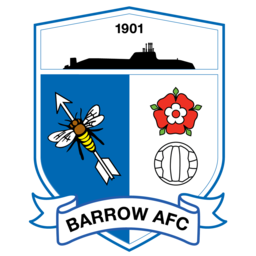 United kicked off their pre-season campaign with a trip to Barrow on Tuesday night and they were met with a high tempo performance from their hosts which left manager John Sheridan saying 'we have a lot of work to do' as he watched his side huff and puff their way through a fiesty encounter.

A debut run-out for loan keeper Joe Fryer saw him called into action early in the piece as he spread himself to meet a firm touch from an inswinging free kick.

And he showed good feet and excellent awareness to get across to tip a fierce 23-yard Rooney free kick away from the top corner as it threatened to bulge the back of the net.

More home pressure brought a close range shot which angled over the target as an outsretched boot met a wicked delivery from the left flank.

United showed in flashes, but a low volley from Stockton and a snapshot from Walters were both too close to the keeper to cause any real problems.

The Bluebirds secured a breakthrough on the half hour when a corner was met by former-Blue Connor Brown at the back stick. His header crashed against the woodwork and Fryer did well to make a fine save as the follow up shot came in. But he could do nothing as an opportunistic overhead kick found its way over the stranded defenders and into the back of the net.

Carlisle started to get forward as the clock ticked down towards the break and Stockton was unlucky when his shot on the spin was spilled by Arnold. The keeper recovered quickly to pick up the pieces.

Good hold-up play from Stockton brought Walters into play moments later but a low effort from the trialist was comfortable for Arnold to handle.

Disaster struck with just 25 seconds on the second half stopwatch when a loose pass invited Barrow to press forward. The United defence was static and Collin could do nothing as a drilled punt smashed into the bottom corner from Hindle.

Half chances were exchanged and Carlisle started to look the more likely, with Jones frustrated to see his goal bound effort blocked.

Gillesphey wasn't too far away when he climbed high for a deep corner but he couldn't keep his header down and the ball came to rest on the roof of the net.

Jack Egan was next to try his luck but the stopper did just enough when he got his hand to a low, accurate 25-yard grass cutter which was bending towards the corner of the target.

The deserved United goal came with ten minutes left to play when Hope made space for himself as he cut in from the left flank. The keeper got a touch to the low shot but he could do nothing as Bennett nodded the loose pieces home from just four yards out.

But the two-goal cushion was restored when Steven Rigg battled his way into space on the right wing for the home side. Hindle took over and finished the move off with a crisp strike.