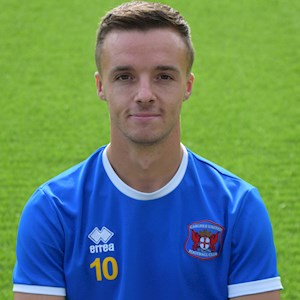 He agreed a new one-year deal in June 2019 which keeps him at Brunton Park until the end of the current campaign.

Scougall played under Carlisle boss Steven Pressley at Fleetwood between March and June 2016, helping the club to retain their League One status, as he made nine important appearances for the Highbury outfit, bagging a goal in a 1-1 draw with Oldham along the way.

The all-action midfielder started his career as a youngster with Hibs and Dunfermline before being snapped up by Livingston, joining the West Lothian club full-time in 2010.

He was part of the Livi team that sealed the Scottish Second Division title during his first season with the club, and became a regular at Almondvale the following year. Scougall's continued good performances for Livingston saw him attract the attention of scouts from south of the border and, in January 2014, he joined Sheffield United on a three-and-a-half-year-deal for an undisclosed fee.

Managerial changes and new signings limited his playing time and, after his loan-spell with Fleetwood Town, he moved to join St Johnstone during the summer of 2017.

He made 27 first-team appearances in his debut season with Saints but was given the nod to look for another opportunity, which led to him sealing his move south to join the Blues.

Stefan is sponsored by Pete Hines.

INTERVIEW: I always knew I wanted to be here


Midfielder Stefan Scougall signed a new deal with United on Friday and we sat down with him shortly after he put pen-to-paper to get his thoughts on his extended stay at the club.

INTERVIEW: It was great to be back out on the pitch from the start


We caught up with Stefan Scougall shortly after full-time in the MK Dons game at Brunton Park on Saturday.

INTERVIEW: It was a no brainer


We caught up with new arrival Stefan Scougall to get his thoughts on joining United at what is a very exciting time of the season.