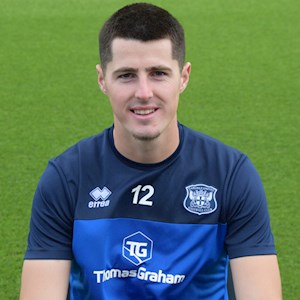 United initially signed defender Jon Mellish on a one-year deal midway through May 2019.

Having been converted to a midfield role by manager Chris Beech, he showed a natural affinity and was quickly offered a new deal. October 2020 brought more contract discussions and an agreement was reached which kept him with the club until the summer of 2022.

Mellish, a Gateshead College graduate, came through the under-19 system with the Heed and also enjoyed a loan spell with Newcastle Benfield as he cut his teeth in the game.

The left-footer, who can play a number of positions, made his first-team debut in the final game of the 2016/17 National League season and was subsequently offered a full contract with the club.

He made a total of 58 appearances for his hometown team, scoring twice, and made his debut for the England C squad in a 1-0 victory over the Estonia under-23 side in October 2018.

He picked up the National League’s young player of the year award for the 2018/19 season at a ceremony in London two days before joining the Cumbrians.

Jon is sponsored by Bob Hope.


Carlisle United are delighted to announce that midfielder Jon Mellish has signed a new two-year deal (with a further 12-month option) which keeps him at the club until at least the summer of 2023.

MANAGER: He brings more than goals


It’s been coming, hasn’t it, that first goal of the season for last term’s 16-strike top scorer Jon Mellish, and it was a goal typical of the way he plays as he stepped in to wallop a touch from...