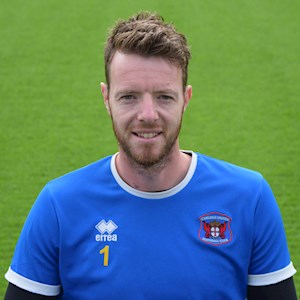 Keeper Adam Collin made a return to Brunton Park for a second spell in July 2018 when he became the fifth summer signing of the 2018/19 season.

He agreed a further one-year deal in May which keeps him at the club until the end of the current campaign.

Collin kick started his career with the Blues when he came up from Workington in the summer of 2009, to train with the squad, prior to joining the club on a full-time basis.

Having cut his teeth at Newcastle United, with spells at Oldham and Doncaster along the way, he went on to make the number one spot his own at Brunton Park with 159 appearances in his four-year stay.

He featured in two Wembley cup finals for the Cumbrians, picking up a JPT winner’s medal in 2011, and became known as a spot-kick specialist following a string of saves in shoot-outs and during games when faced with penalty kicks.

He moved to spend three years with Rotherham in May 2013 and then spent two seasons with Notts County, with more valuable experience gained in play-off campaigns, where he made a total of 81 appearances.

Adam Collin is sponsored by The Family Guys.

Adam Collin on the Notts County and Forest Green games

Adam Collin on the Stevenage game

INTERVIEW: These ties are good ties and it’s what the cup is all about

INTERVIEW: We caused our own problems


Goalkeeper Adam Collin gave us his verdict on the Swindon away defeat shortly after full-time on Saturday.

MANAGER: He has a real history at the club


Cumbrian-stopper Adam Collin has been handed a duty he has already described on social media as a ‘great honour’ having been confirmed as the club’s captain for the 2019/20 season.