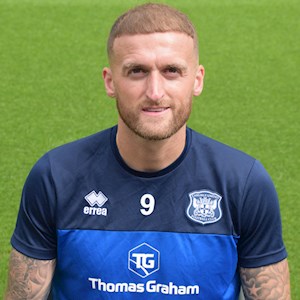 A popular addition to the squad with a high work rate and goal threat in each of his 10 appearances, prior to the Covid lockdown, he subsequently extended his stay in Cumbria until the end of the 20/21 campaign. A clause was triggered at that point which kept him at Brunton Park for a further 12-months.

The versatile front man was previously with local rivals Morecambe where he bagged five goals in his 26 appearances through the first half of 2019/20 season. He featured in both of the pre-Christmas fixtures against the Blues for the Shrimps that year.

He started his career as a youngster with Oldham where he secured his first professional contract. He scored eight goals in 76 appearances for the Latics before moving to Morecambe for his first spell with the Shrimps.

Two years by the seaside preceded a switch to Plymouth, where he made over 100 appearances for the Pilgrims, netting 25 goals along the way.

Spells with Rochdale, York (loan), Hartlepool and Notts County followed, where he continued to find the back of the net, before he returned to Morecambe on a half-season deal in July 2019.

Lewis made 50 appearances for the Blues during the 2020/21 season, scoring nine goals.

Lewis is sponsored by The Family Guys

INTERVIEW: If you miss from there it looks really bad


Goal number seven of the season from Lewis Alessandra on Saturday afternoon proved to be the difference between the two sides on the day as the Blues went on to keep a fifth clean sheet from their...