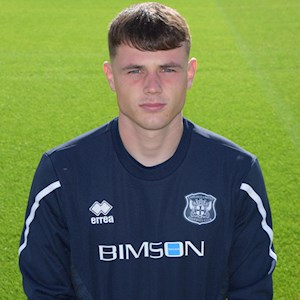 Forward Jack Stretton joined the Blues on a season long at the beginning of August 2022.

A Derbyshire lad, he has progressed through the youth ranks with the Rams right through to the first-team. The striker entered his first full season as a professional at the start of the 2020/21 campaign, following a strong start to the season with the U23s where he scored eight goals in eight games.

That caught the eye of then manager Wayne Rooney and he went on to make his league debut against Wycombe Wanderers, coming off the bench in a 1-1 draw in November 2020.

Stretton was loaned to National League side Stockport County between March and May 2021 and he made a positive impact, scoring three goals in five games for the Hatters as they challenged for promotion back to the EFL.

Stretton was recalled early due to a striker crisis at Pride Park but unfortunately suffered an injury, which ended his season early.

Highly-rated, he grew in stature at his parent club when he scored 14 goals in all competitions for the U18 side in the 2018/19 campaign. That was followed by 12 goals and three assists from 18 appearances, which elevated him to the U23 set-up for the first time.

His superb form in front of goal saw him called up to the Scotland U19 squad during the 2019/20 season. Stretton scored his first professional goal for Derby during the 2021/22 campaign, in a 2-1 defeat against Peterborough United, and went on to make 16 appearances in total, which mainly came from the bench.

Jack is available to sponsor - email commercial@carlisleunited.co.uk for more information.