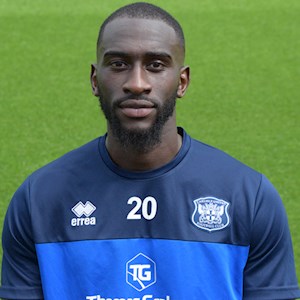 Carlisle secured attack-minded player Gime Touré on a one-year deal in the summer of 2020.

A clause was triggered in his contract in May 2021 which extended his stay until the summer of 2022.

Touré, a strong and mobile attacker, began his career back in his home country of France where an eye-catching 2013/14 season for ES Viry-Chatillon earned him a trial with West Brom.

He also played for La Roche, Brest B and Fontenay LCVF in Championnat National 2, Group D in his native country.

The lively front man returned to England in 2017 when he spent pre-season with Wrexham before going on to win a deal at eventual Conference champions Macclesfield Town.

He was with AFC Fylde for the first half of the 2018/19 season before ending the campaign at Sutton, playing 41 games and hitting the net seven times.

The 2019/20 season saw him enjoy a hugely successful stay with Hartlepool, where he scored 13 goals in just 39 appearances.

Gime made 38 appearances during his first season in Cumbria, scoring four goals.

Gime is sponsored by Chandler Caudill


Carlisle United Football Club can confirm that the red card shown to striker Gime Touré on Tuesday night has been overturned on review by an FA panel this afternoon.