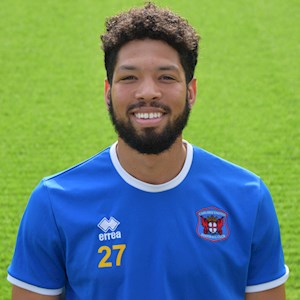 Central defender Nathaniel Knight-Percival joined the Blues on a one-year deal at the beginning of July 2019.

Enfield-born Knight-Percival spent the last three seasons with Bradford City where he made 135 appearances, predominantly as a left-sided central defender.

His versatility saw him cover a number of other positions, including left back. The no-nonsense defender started his career in non-league with Histon and made the move up the ladder to join Wrexham in 2010.

He took his first step into league football with Peterborough where he made 32 Championship appearances during the 2012/13 campaign. Over 50 appearances with the Posh included an EFL Trophy victory over Chesterfield in March 2014.

A move to Shrewsbury followed that summer and he made 76 appearances for the Salop during his two-year stay, which included a five-month spell as club captain between January and May 2016.

His June 2016 move to Bradford was initially for two seasons, but his performances earned him a contract extension in October 2017.

Nat is sponsored by CUSAT.