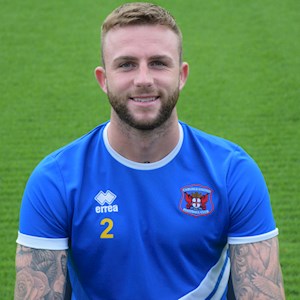 United signed versatile right back Christie Elliott on a one-year deal midway through May 2019, which keeps him at Brunton Park until at least the summer of 2020.

South Shields born Elliott started his footballing life as a centre forward in non-league circles, with Jarrow and Whitley Bay before being snapped up by Partick Thistle, a Scottish Championship outfit at that time.

He scored on his debut for the Jags and became an almost ever-present on return from a loan with Albion the following year. He was part of the squad which took Thistle into the Scottish Premiership in May 2013, and was tied down on a further two-year deal at the end of that successful campaign.

His versatility came to the fore as he covered a number of positions through a series of injury and suspension crises, and his conversion to right back was completed as he made the position his own at Firhill. He made just under 250 appearances in total whilst with Partick.

Christie is sponsored by Pete Blue.