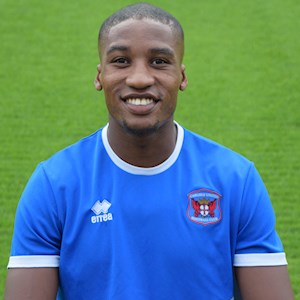 Versatile defender Aaron Hayden signed a one-year contract [with a club option] at the end of July 2019 following a successful trial period with the club.

The tall right-sided player teamed up with the Blues a fortnight before he sealed his deal and made a good impression through a series of pre-season friendlies.

Croydon-born Hayden spent time in the youth system at Chelsea before moving north to join the Wolves academy as a 16-year-old in 2015.

He enjoyed loan moves with Newport County, Hemel Hempstead Town, Bromley and Telford whilst with the Molineux outfit, but became a free agent on his return from Stourbridge at the end of the last campaign.