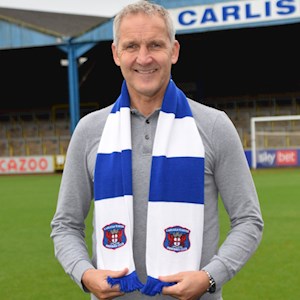 Keith Millen was appointed manager of United at the end of October 2021.

As a player, Croydon-born Millen, 55, cut his teeth in the game as a youngster with Brentford and Palace, and went on to serve the Bees for almost 11 seasons, scoring 20 goals in close to 400 appearances.

He moved to Watford at the beginning of 1994 and stayed at Vicarage Road for just over five years, earning status as a favourite when he helped to steady the ship and avoid relegation during his first season with the Hornets.

Two successful promotion campaigns and an eye-catching brand of football further cemented his status with the fans as he became an ever-present at the heart of the back line. He ended his playing career at Ashton Gate, with 75 games in four seasons with Bristol City, and he then made the smooth transition into the coaching set-up with the club.

Two spells as caretaker manager followed, and he was made permanent manager following the unexpected departure of Steve Coppell in October 2010.

He held that post for a year, before moving on to work under Neil Warnock and Alan Pardew at Crystal Palace, via interim coaching appointments at Spurs and Portsmouth. He had three separate spells as caretaker with Palace.

Another caretaker period came during his stay with MK Dons, when Dan Micciche left by mutual consent in April 2018, and his most recent coaching appointments were in Sweden, where he worked with Halmstad.

His efforts there caught the attention of Gothenburg-based Örgryte, who offered him the role as manager.

Keith is sponsored by leaseyournewcar.co.uk