The Abbeymen head north this weekend looking to find some consistency following what has been an up and down month of results.

A home win and an away defeat is their league return from November, and they had the disappointment of falling out of the FA Cup on Tuesday night when Alex Fisher grabbed the winner for Exeter with just 20 minutes to play in their first round replay.

Their last five league outings have been a snapshot of why they have occupied a mid-table slot for most of this early part of the campaign with two wins and a draw punctuated by two frustrating defeats.

The prolific Sam Smith is the one to watch this season - with seven goals and two assists to his name already - and he has been ably backed up by Paul Lewis, who has four goals, and Marc Richards and Jack Roles who have three strikes each.

Under Colin Calderwood they have shown that they can play football and do the ugly stuff, and they'll be looking to bounce back from that midweek disappointment come Saturday afternoon.

Speaking ahead of the game, caretaker boss Gavin Skelton said: "The players have been excellent this week and it's now up to us all to get out there and perform on Saturday.

"We showed some good signs at Port Vale and, looking back, we were disappointed not to come away with something. We've spoken a lot to the players about making sure they do things properly in both boxes.

"They know what's required and, if they do what they've been doing in training, I know they'll give themselves every chance of winning the game which, ultimately, is what everyone wants." 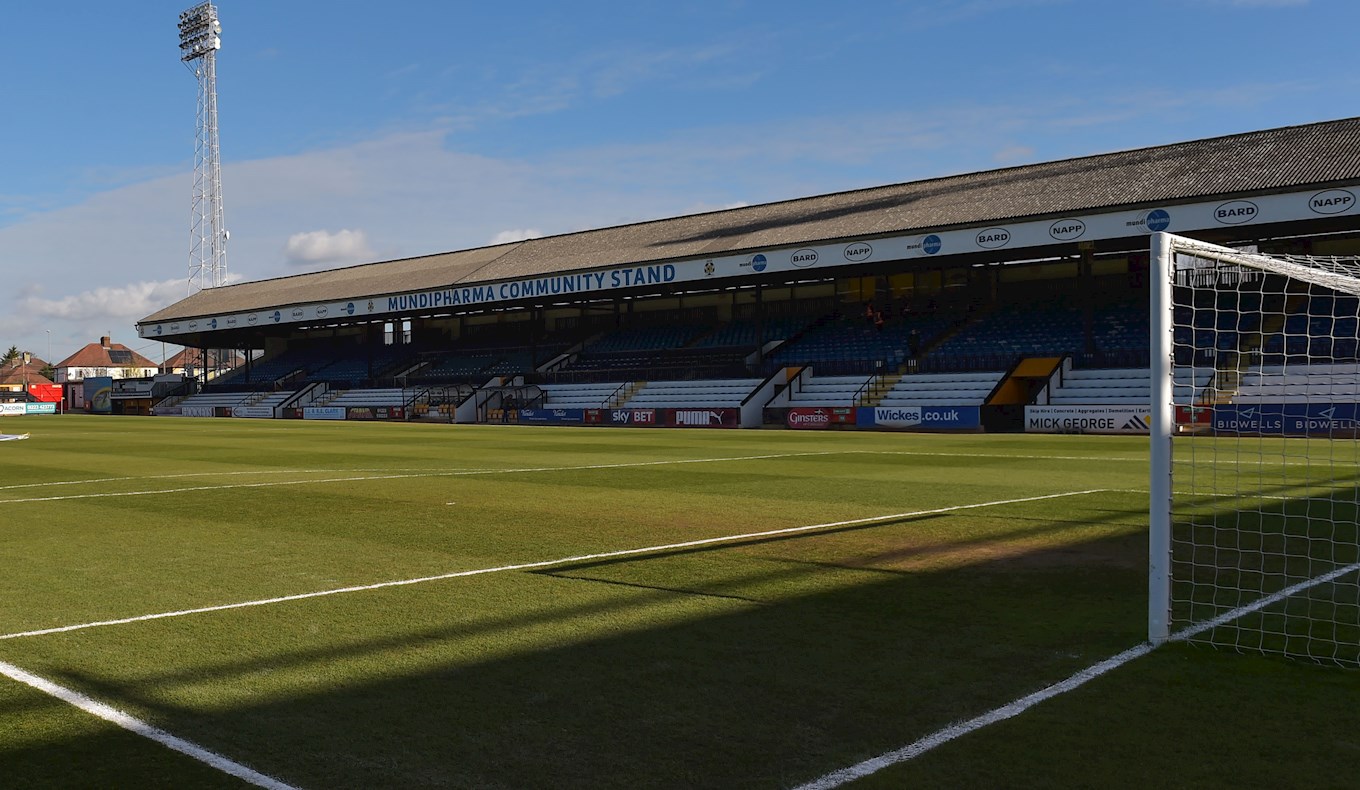 The clubs have met a total of 30 times in all competitions and honours couldn’t be more even if they tried. Nine wins to the Blues, eight wins to Cambridge and 13 draws … which way will it go this weekend?

The last coming together of these two sides was in March this year when United had to recover from conceding a very early goal. Jamie Devitt and Nathan Thomas put the Blues ahead before the break, but Jabo Ibehre came back to haunt us when he netted the equaliser in the second half.

We were at the Abbey in September for our first meeting with the U's last season, and the teams had some baking hot weather to contend with on what was a lovely late summer's afternoon. A good opening spell from the home side brought a goal for Jevani Brown, but United were back on terms just before the break when Richie Bennett looped a header into the back of the net. The Cumbrians had the better of the second half and they took the points when Ashley Nadesan bagged from close range.

The referee for this game is Mr Sebastian Stockbridge.

He has taken charge of 15 games this season showing 49 yellow cards and four reds.

He was with us earlier this season for our 4-2 home loss at the hands of the Wolves under-21 side. Hallam Hope and Ryan Loft scored our goals and Canice Carroll received a yellow card.

The last time he was here prior to that was for our 2-0 home defeat against Morecambe in October 2018. There were no names taken on the afternoon but the game was lost by half time.

He was also with us in August 2018 for our 1-0 home victory over Crewe. Ashley Nadesan scored the winning goal, with 20 minutes left to play, and there were no United names taken on the day.

We saw him on three occasions during season 2017/18 – Danny Grainger [who also scored], Mike Jones, Mark Ellis and Jamie Devitt were all carded in our 1-1 draw with Luton in April.

The Blues were at home to mid-table outfit Cambridge United on Saturday afternoon as they looked to make it back-to-back home league victories following on from the win over Macclesfield Town at the beginning of November.

Caretaker manager Gavin Skelton was at the helm for a second time and he made one change to the starting line-up with Jon Mellish stepping up in place of Byron Webster.

An early corner for Cambridge was knocked to the edge of the box by Branthwaite but Taft was there to put his boot through a volley. That hit a defender and the home side was able to clear its lines.

It was a good start from the visitors and persistence in the tackle saw them eventually get the ball to Roles. He was at a distance but he opted to shoot as he spotted a gap. Collin watched in comfort as it bounced into the Warwick Road End advertising hoardings.

United found a spark when they played their way through midfield with Carroll at the heart of it. He spread it to Gethin Jones, and his initial drilled cross was just an inch too far in front of Loft. Thomas recovered it, and he in turn found McKirdy as another good delivery came in. The winger dropped a shoulder and whipped it across but there was nobody there to finish it off.

The game settled into a midfield battle, with a 30-yard effort which rolled wide from Olomola the only other moment of note from the opening 20 minutes.

The Blues won a corner when Iredale popped a pass forward for McKirdy to chase with the home team looking to up the ante. Loft got there with a header but it looped down and the whistle blew as he was judged to have handled the ball.

Carlisle won a free kick half way inside the away half just before the break and the delivery from Thomas was on the money as Olomola peeled off his marker at the back post. Eight yards out he connected with a fierce header but it was always angling disappointingly into the side netting.

Up at the other end and Cambridge were gifted a chance when Branthwaite got the ball stuck under his feet. Smith was onto it but he wheeled away in disappointment as his volley flew high and wide.

The Abbeymen had half chances in time added on for the first period, but Smith headed over from a Jones cross and Dallas was stopped by Collin as he tried to force a way through from another high delivery.

There was an inquisition immediately after the break when McKirdy clipped a fantastic free kick into the mix. It caught the Abbeymen on their heels and blue shirts were left looking at each other as they failed to anticipate what would have been a simple tap-in.

United were even closer moments later when McKirdy found space on the left flank. His cross found Olomola on the leap but Mitov completed a fine save as it whistled at his top corner.

Cambridge sent men forward as they looked to get something going but efforts from Maris and Dallas were easily blocked as Collin remained protected.

Another high ball into the box caused real problems for the visiting defence as Loft made a nuisance of himself. It pinged around and Harry McKirdy was almost celebrating as he nodded it towards the far corner. Darling got just enough on it to divert it past the post.

Striker Ryan Loft headed wide when he got onto a deep free kick from Thomas as the clock ticked down, and wide man Thomas went close himself when he carried the ball into the box following a headed pass by Carroll. It took a deflection and Darling was needed to clear it off the line as it spun past stranded keeper Dimitar Mitov.

United survived a scare in time added on when Darling put a corner wide, and that was that as the sides had to settle for a share of the spoils.