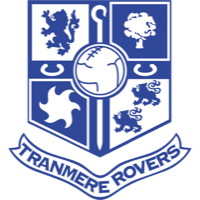 Newly promoted League One side Tranmere Rovers are the final pre-season visitors to Brunton Park on Tuesday night.

The game should prove to be another stiff test as Micky Mellon looks to get his side ready for the step up in division's come the start of the new campaign.

United are expected to field a smiliar starting eleven to that seen on Saturday with the emphasis on fitness levels and high tempo once again.

"The lads have been fantastic so far, they really have, and it's been good to see so many of things we've talked about coming into the games we've played," manager Steven Pressley said. "We're short in areas, we're fully aware of that, but I can't fault the current group at all.

"That's good because it means we have a firm platfrom to build from as we look to recruit the players we need. Once that happens I think we'll see that we've got ourselves a very good team."

Car parking is back to normal on Tuesday night, with the usual spaces available around the ground. Our parking spaces are £3 for cars and £15 for coaches.

Please take care on the west side of the stadium, with a small number of car parking spaces out of bounds as the roof works on the Cumberland Stand are ongoing.

Away fans will be housed in the Pioneer Stand for this fixture, with the Pioneer Bar open for refreshments.

The catering huts will be open, as usual, with the Sunset Suite and McVities Bar open for refreshments.

Please note – McConnell’s Bar and the Sporting Inn will be closed for this fixture.

Home and away fans can purchase tickets on the night – please allow time to make your purchase.

Under-7s must be accompanied by an adult.

Please note - the ticket office will be closed after the game.

Carlisle United rounded off their run of home friendly fixtures against League One side Tranmere Rovers on Tuesday night.

And, following a stuttering start, they got their football going and controlled the game, with some individual stand-out performances to complement a solid team display.

The visitors had the first chance of the evening when a whipped corner fell nicely for Monthe. He put his laces through the ball but it crashed down off the underside of the bar before being swept away to safety by Mellish.

Keeper Adam Collin then reacted well to save a deflected drive from Banks, and United had to concentrate as another dangerous corner pinged around inside the area.

Carlisle started to settle and a sweeping pass from Webster found McKirdy on the run. The wide man drove at the heart of the defence but he scuffed his shot and Davies was able to save comfortably.

The action started to flow and a ricochet from a loose pass sent Jennings into space. He shot early but his dipping rasper smashed back off the woodwork.

The Blues deservedly took the lead when McKirdy showed real purpose to go through three challenges on his way into the area. He looked up to see Galloway arriving late, and an instinctive punt from the second-year midfielder needed a parry from the stopper. Striker Kwame Thomas was on hand to pop the rebound into the waiting net.

The lively McKirdy crunched a back post volley from a Mellish cross right at Davies as United started to dictate the pace of the game, but Rovers were left to rue their luck once more when Morris dropped a shoulder before letting one fly at the other end. It spun past Collin but rattled back off the top of the bar.

Carlisle pressed for a second and they got their reward when Galloway slipped McKirdy through on the overlap. He dinked a lovely reverse ball towards Thomas and the striker doubled his tally for the evening with a stunning first time finish.

Multiple changes slowed the pace of the game down after the break but there were half chances for McKirdy and Thomas as the better of the play continued to come from the hosts.

And it became a night to remember for first year Lewis Bell when Armstrong clipped a beauty of pass into the youngster's path. He made no mistake as he drilled his shot from the angle into the bottom corner.

Jennings and Payne went close for Rovers as the game went into its closing stages, but Carlisle shut up shop and rode the game out to claim a well-deserved victory.