The Blues met the Blues at Frenchfield Park on Saturday as United continued their pre-season build up with the always enjoyable local friendly in Penrith. 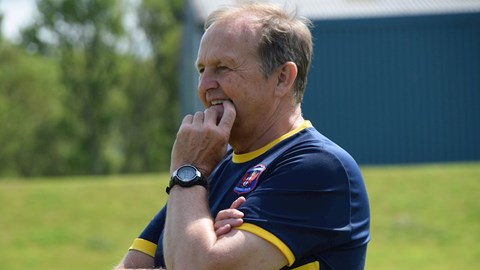 YOUTH: All you can ask for is support from your first team manager

Steven Pressley sent out a mix of first team players and trialists for the first 45 minutes with young professional Keighran Kerr joined by players from the under-18 squad for the second period.

The away side signalled their intent inside the first minute when they attacked in numbers. The ball bounced loose to the unmarked Hallam Hope and he left Dan Staples with no chance when he executed a cheeky lob.

A half chance fell to Reeves as Carlisle enjoyed the bulk of the possession, but he lost his bearings as he pulled the trigger and his effort angled over the bar.

Penrith held their shape and kept the visiting attack at arm's length, but the lead was doubled when 17-year-old Jarrad Branthwaite expertly took a diagonal ball into his stride just before the break. He bided his time before putting it on a plate for trialist Isaac Buckley-Ricketts to pick his spot.

The start to the second half was a carbon copy of the first as United made an early attack count. An inch perfect through ball from Josh Galloway was matched by a great run from Keighran Kerr and the striker made no mistake as he clipped it over the advancing stopper and into the net.

A point blank two-handed save by youth first year keeper Isaac Robinson denied Chris Wraight what looked to be a certain goal, when he burst through to go one-on-one, but it was United who wrapped up the scoring when they sparked a lightning quick break from a corner.

Midfielder Josh Galloway kept his cool to nick it past the keeper before tapping it into the empty target.