The Blues last played Hibernian in August 2010, when then manager John Hughes brought a strong team down to face Greg Abbott’s League One side. 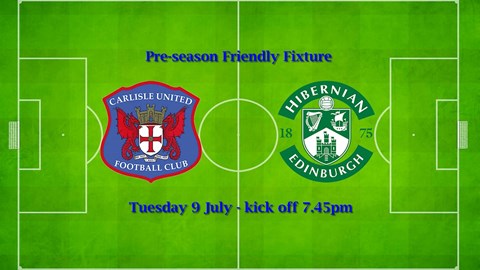 A solitary strike from Ian Harte was enough to earn a victory for the hosts in what was a very entertaining game to watch. A crowd of 3,034 came to the Saturday fixture, with Hibs very much keeping an eye on their Europa League double-header against Maribor.

They’d lost 3-0 in Slovenia just two days before the friendly meeting with United, and had it all to do for the return leg just four days later. For the record, they lost that one 3-2, at home, and dropped out of the competition.

The Hibees have a 3-2 away defeat from last Wednesday at Arbroath and a 3-1 away victory on Saturday at Dunfermline under their belts as they continue to prepare for their season opener against Stirling Albion this weekend, in the group stages of the Scottish League Cup.

They’ll come to Brunton Park looking to fine-tune things at an advanced stage of their pre-season.

Manager Steven Pressley said: “Each of our group will play a certain amount of minutes tonight and we’ll be looking to start to put some of the things we’ve been doing through the first 10 days of pre-season into action.

“As I’ve said before, I don’t read too much into pre-season friendlies, particularly at this early stage, but there are certain things that are key to me and that I want to see. I know everything must lead to the first game of the season where we’ll start being judged properly, but pre-season will allow us to grow and improve as a team.

“The players are aware of what is expected, and this is a chance for everybody to get out there, trialists included, and to get some important minutes on the pitch as part of what is an intensive training schedule.

“Hibs will provide a real challenge for us. They’re an exciting team and they will be looking to this game as a way to get ready for their first cup fixture on Saturday. I’m sure they’ll enjoy our big pitch and it’s a game we can look forward to.”

Away fans will be housed in the Pioneer Stand for this fixture, with the Pioneer Bar and Balderstone Bar open for refreshments.

The catering huts will be open, as usual, with the Sunset Suite, Sporting Inn and McVities Bar open for refreshments. Please note – McConnell’s Bar will be closed for this fixture.

Home and away fans can purchase tickets on the night – please allow time to make your purchase.

Season ticket holders can collect their season tickets this evening from the collections window on the west side of the stadium [until kick off at 7.45pm].

Under-7s must be accompanied by an adult.

United opened their pre-season campaign with a home game against Scottish Premier League side Hibernian.

Manager Steven Pressley used four trialists through what was an entertaining game to watch, with all seven new arrivals also playing some part during the fixture.

The Blues went with a 4-3-3 formation with captain Byron Webster the anchor of a back four with Jon Mellish by his side. Branthwaite and Iredale completed the defensive quartet, with a midfield three of Bridge, Jones and Dixon charged with patrolling the length of the pitch.

McKirdy and Buckley-Ricketts were up front, along with a striking trialist, and a high pressing and energetic approach was adopted from the off with the hosts looking to get at the away side at every opportunity.

The green shirts created the first opening of the day when Horgan found himself in space on the edge of the area. A firm shot took a deflection and Gray was able to watch it head wide.

The same player arrived late for a cross from the right moments later, but his header lacked power and United’s stopper was able to gather it in.

It became nip and tuck as both sides attacked with purpose and Carlisle had to take care when Shaw overlapped to get into a good area. His driven effort struck Webster and spun away for a corner.

The Cumbrians started to edge on top, with good possession and use of the ball, and McKirdy was an inch away from putting it on a plate for Buckley-Ricketts as he skipped past a challenge and delivered low. A defensive touch was just enough to take it beyond the advancing wide man.

A testing corner just past the quarter hour from the away side brought Newell into play as he ghosted off his marker with the ball spinning free. His shot was rushed but it was always heading wide.

Carlisle were next to probe when Iredale went on a sprint down the left flank. He bent it in low as he reached the edge of the box and McKirdy got a touch as he made a near post run. The keeper was beaten but it flashed agonisingly just past the upright.

The Blues took the lead on the half hour when Jack Bridge shielded the ball before unleashing a crunching grasscutter which had Marciano scrambling. The keeper got a hand to it but it wasn’t enough as it squirmed under his body and over the line.

Penalty appeals were waved away moments later when McKirdy appeared to be chopped to the floor, and Gray had to be at his best at the other end when Shaw angled his run having beaten the offside trap. A full length dive and a strong hand kept the ball away.

But the Hibees were back on level terms just before the break when a misplaced pass eventually allowed Kamberi to break free. He stayed calm before slotting it into the bottom corner.

Carlisle reclaimed the lead with their first meaningful attack after the break when Scougall fed Hope on the edge of the box. The striker flicked the ball into the air and stunned everybody with an unstoppable volley which flew into the top corner.

The lively Hope was denied a second by Marciano when he cut in from the left, and the hosts thought they’d sealed a win when second year youth team player Jamie Armstrong whipped the ball in from the right. Kerr flicked it on and McGregor could do nothing as it ricocheted off his chest and bounced into his own net.

The game really started to open up and Hibs were right back in it when a high ball over the top was claimed by Allan. He stuck a toe out and Gray could do nothing as it smashed into the net.

Things really came to life in the final four minutes when Doidge jumped highest to thunder a corner past the static United back line. And the Scottish giants claimed a last-ditch victory when Josh Campbell pulled the trigger on an accurate effort. The large travelling contingent celebrated noisily as the ball crossed the line.