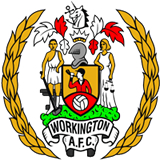 United enjoyed another good test at Borough Park on Tuesday night as Workington did Anthony Wright proud with an excellent performance to mark his testimonial.

It was the home side who came out of the blocks the quickest and former Carlisle youth player Arron Bradbury wasn’t too far away as he broke into the box from the left flank. He struck his shot well, but it flashed past the upright.

Etuhu tried his luck from distance as the visitors started to force their way into the game, and that was followed by a huge round of applause as man-of-the-moment Wright left the field with 16 minutes on the clock.

His departure was followed by a good spell for the Blues and they were awarded a penalty when Yates was toppled in the box as he tried to make room for a shot. Jamie Devitt placed the ball and made no mistake with a perfect 12-yard finish.

The away side had a scare when a Parkes back pass caused confusion, with Collin stretched to deal with an awkward bounce, but the duo recovered and cleared their lines.

But the lead was doubled following a flowing move which brought Yates into the area from wide. His first effort was well parried by Taylor but the striker kept his eye on the ball and calmly slotted the loose ball into the waiting the net before the defence had time to regroup.

Carlisle extended their lead to three goals in the second half when Jones pulled off his man and surged into the box. A low cross went through legs and Richie Bennett said thank you very much as he poked it home from close range.

Fryer was called into action to save at full length from a Bradbury thunderbolt, and the hosts got their consolation goal when Kieran Maguire picked his spot as slick passing left him with space to work in.